Serials for 9-16: Vampirella and Thunderbolts

Hah! How long has it been since a weekly review? I haven't even bought any new weeklies in a while, partly because everything costs too much, and partly because I've been tourist-ing for a while.

I missed the second issue of Doom Patrol when it came out, as well the fourth issue of Gotham City Sirens, and you know what? I'm not really all that worse for missing out on them. Doom Patrol's been getting one-upped by its back-up feature, and Sirens #4 was a filler issue anyways!

That's why I didn't get those at all this week. I got some other stuff, like

It takes a lot of guts to make an issue $1.99, especially if you're an indy publisher, so I think that kinda risk deserves a chance. I picked up the first issue of the four-issue mini, and it's not half bad. Vampirella the character is revamped into Vampirella the urban myth. 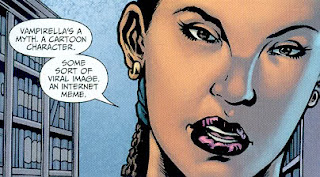 Naturally, a host of demons plan on opening a gate to hell, and it's up to Vampirella and the gang to stop them! Literally, the one thing new about the story is how the humans frame it. The woman up top is a women's social worker "marked" by Vampirella ten years ago, and her husband is an architect taken over by demons so that he can open the gates to hell. I smell a clash of the sexes! 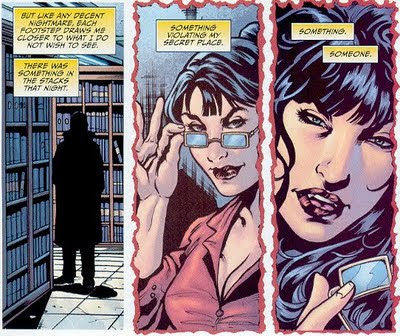 I've never read a Vampi comic before, but it's pretty hilarious that Vampirella, this huge sex symbol, is finding herself in this one character who's a women's social worker. I was a little amused that they made the cheesecake in-story -- Vampi dresses up as a librarian and "marks" the social worker in the Georgetown Law Library! Pretty clever, guys. I also like that demons can possess you by feeding you cooked bits of your fellow human. That is insane. 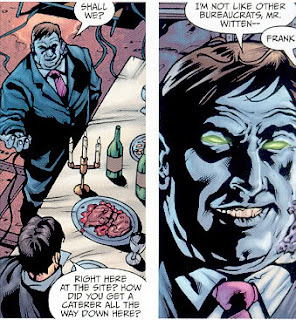 Okay dude. You know something's up when your contractor has a weird growth on the side of his neck, glowing green eyes and blue flesh. Come on, guy.

The story itself is standard Andy Diggle: make a few twists, a double-cross and an action scene! It's exciting and all, but there are some action scenes that are way too fanboy-ish (stopping bullets by spinning your sword really quickly? This is not a video game.), and, at times, legs look like they're in the middle of yoga when they really look like they should be kicking.

At the end of the issue, Norman Osborn shoots Nick Fury in the head???? Three times???? Then they tell you to check out Secret Warriors #8 "for another perspective"????? Forget that. To be honest, the only part that really brought this issue to standard was Black Widow's hair. 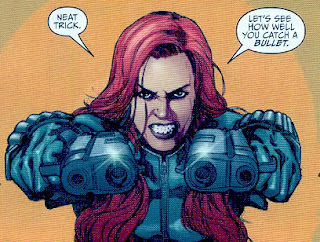