DC's Final Crisis: STOP! You must be supercool to proceed.

That's right kids, my library got in the miniseries that we all called "confusing." and "overly reliant on continuity. I want a sandwich." What's my verdict? Am I too confused and in need of a sandwich?

Final Crisis
by Grant Morrison and a mess of artists

WHAT IT'S ABOUT: There was a war and evil won! The New Gods died and were reborn into hip reverends, tiger-dudes and Alpha Lanterns! The evil ones succeed in bringing the end of the 52 worlds, and it's up to the DCU's greatest heroes to save us!

The Flash must outrun Death, the Black Racer! Death can't run greater than the speed of light, but here's a Flash fact -- Barry Allen can! 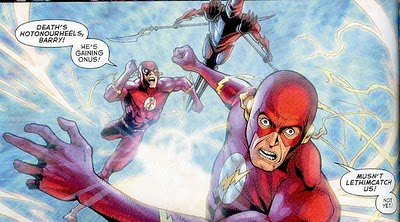 Superman must rise into the 4th dimension, cross universes and do battle with the vampire of 52 universes to obtain the elixir that can't be brought back to save Lois -- all in the space between her final heartbeat!

WHAT I LIKED: It's billed as a tale of what happens "when evil wins," and yeah, the world really does get taken over by Darkseid's Anti-Life Equation. It's kinda awesome to see how everyone, from Green Arrow to Green Lantern, deals with it, and near the end the JL tower is the only refuge from the Anti-Life Equation.

Morrison takes every high concept from the DCU and throws it at you! Can you handle it?

WHAT I DIDN'T LIKE: I believe there was a scheduled delay in the single issues. If this is so, why do so many artists fill in for JG Jones? That's kind of disappointing to see.

The plotline gets pretty thick and bramble-y. I couldn't tell it to you myself, but the fights are pretty great, and the concepts are pretty great. For a major crossover event, it could've done worse (Secret Invasion), but I think it's better than DC's recent stuff (Infinite Crisis). 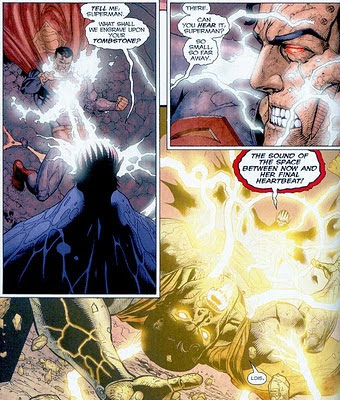 EXTRAS?: Included is the miniseries Superman: Beyond and the one-shot Submit. Superman: Beyond is totally insane and trippy and a great read. Submit, eh, not so much. These two are sandwiched in between issue 3 and 4 of Final Crisis. There's a small sketchbook at the end of it from JG Jones. 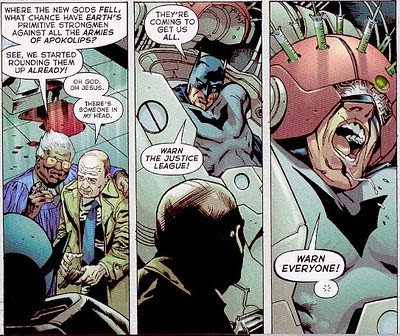