Hi all! Today I have not one, not two but three comic book trades for you. Ya dig?

Hey, I've never read any of Hickman's Fantastic Four before, and, thankfully, this library book was as good as any other. He starts right off the bat with an upset in one of the characters' status quos: due to exposure from the recent world they were exploring, The Thing sheds his rock skin and becomes a human-looking Ben Grimm what with hair and all. This makes for my favorite issue of the trade, in which Johnny Storm takes Ben out for a night on the town, and it's pretty touching. Check out who they have dinner with: 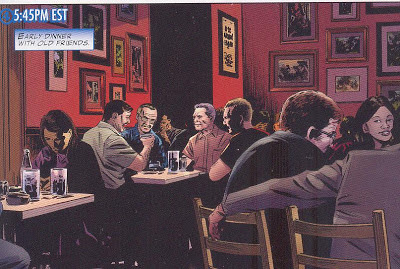 Get it? It's Stan and Jack. If ever you had any doubts about Hickman as a Fantastic Four writer, they're taken down right there. Ben Grimm also runs into the all-new, all-action Yancy Street Gang, a group of now-unemployed stock traders from the recession that bully unaware New Yorkers:

Nice one Ben! At the end of the issue, Ben goes to see Alicia, and it's an excellent scene.

Although it was my favorite, Ben's arc isn't the main point of the trade -- the reason it's called "Three" is that Johnny Storm dies in this storyarc, saving the world from another Annihilus invasion. I'm sure it was a big deal in 2011, when it came out. It's given its proper weight and it's heroic, but it's hard to be anything other than ambivalent about it. 'Cause, oh look, hi Johnny, you returned in issue 600 in 2012. Thanks comics.

I read this one about two months ago so there's this huge gap between what I remember and what's actually there on the page. I skimmed through the thing when I was on the toilet, and I honestly can't tell you much more than, "Bucky reluctantly accepts the mantle of Captain America and handles the duties in his own way while still honoring Steve Rogers."

There's a story here, I'm sure, but until you've read all the issues in "The Death of Captain America," it's not really there. Re-readability works only if you read every issue together, and no single issue stands alone. It's won awards and prestige, but Brubaker's Captain America goes at a pace that I can't appreciate. But hey, check out Bucky's bionic arm whamming a dude by its own device

Hah! It'll be the new banner here eventually. This trade is labeled volume 2, but volume 1 is labeled "Winter Soldier" and collects issues 1-7. I get that this is the second volume for "The Death of Captain America," but that's a really cryptic way to label your paperbacks, Marvel. Boo.

American Vampire vol. 2
collecting "Devil in the Sand" and "The Way Out" back-ups (issues 6-11)
by Scott Snyder, Rafael Albuquerque and Mateus Santolouco
$11.42, Amazon

It takes a while for "Devil in the Sand" to get going, but by the third issue, you can really sink your teeth into it. Leave it to American Vampire to introduce new characters in the middle of the title and make them compelling. It's America in the 1930s, and we take the perspective of the sheriff of a small town in Nevada. You might have heard it -- it's called Las Vegas, and a few businessmen are attending the small town for the construction of the Boulder Dam. And it turns out those businessmen . . . are vampires! 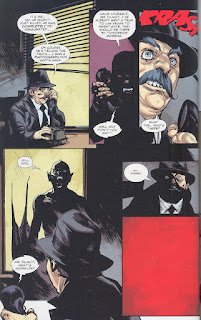