If you're hankering for some Man of Steel, have no fear: chezkevin's here! Today we've got two hardcover editions to talk about with you. I really liked one of them. Can you guess which???

It's very rare that I say this, especially for a $24.99 that collects material from just four comic book issues, so you better listen up. The stories here are extraordinary and worth reading for anyone who appreciates super-comics. Alan Moore understands Superman -- he understands what challenges the Man of Steel, he understands his desires and he knows how to tell a good story with Superman. Not since Grant Morrison's All Star Superman have I read such a profound understanding of the character, and that's a damn shame.

Now, the stories. There are three of them, starting with the two-part "Whatever Happened to the Man of Tomorrow?" which serves as a "last story" for Superman as the Crisis on Infinite Earths mega-event rebuilt the DC Universe. It imagines a story "10 years from now" that reflects on Superman's final confrontation with his greatest enemies and it's as powerful then just as it is now. It evaluates that crucial balance in comic books: the reader's want to read them forever against the reader's desire to see the characters happy. Doesn't Superman deserve a happy ending too?

The second story introduces an asteroid that has the effects of straight up killing Superman, starting with a fever. It's a moody thriller that's unique and powerful. And it's not just because he holds hands with Swamp Thing while he's dying:

The third story begins with Superman's friends meeting at the Fortress of Solitude to give him his birthday present, when suddenly, they happen into a terrible discovery! Mongul's set the "Black Mercy" on Superman, a half-plant half-parasite that bonds to the host's chest and gives them a fantasy of their greatest desire. It's a great insight to see Superman's greatest desire: Krypton never blew up -- and we get a story of what happened if it didn't. It's smart, it's powerul, it's unique. It's a shame that super-comics have lost Alan Moore, he's really a treasure to the industry.

I just typed the above and found out that issue 700 is included in this hardcover. It's not that good. For a 700th issue, Superman deserves better. It takes place after the "New Krypton" saga: Superman's newer, sexier, more attractive home planet has exploded and, in a need to reconnect with Earth, he decides to take a walk across the country (America, just in case you haven't assumed the anglocentrism inherent in super-comics). He meets people in small towns and helps them out in small ways. The premise is not that bad, and there are some nice slice of life moments in there. The premise is not so bad, but it's the execution that's lacking.

See, there are some ways that the story could be told, but the writer decides to put Superman as this odd contemporary version of superdickery. For instance, the Man of Tomorrow quotes Thoreau and strokes his chin at a random dude: 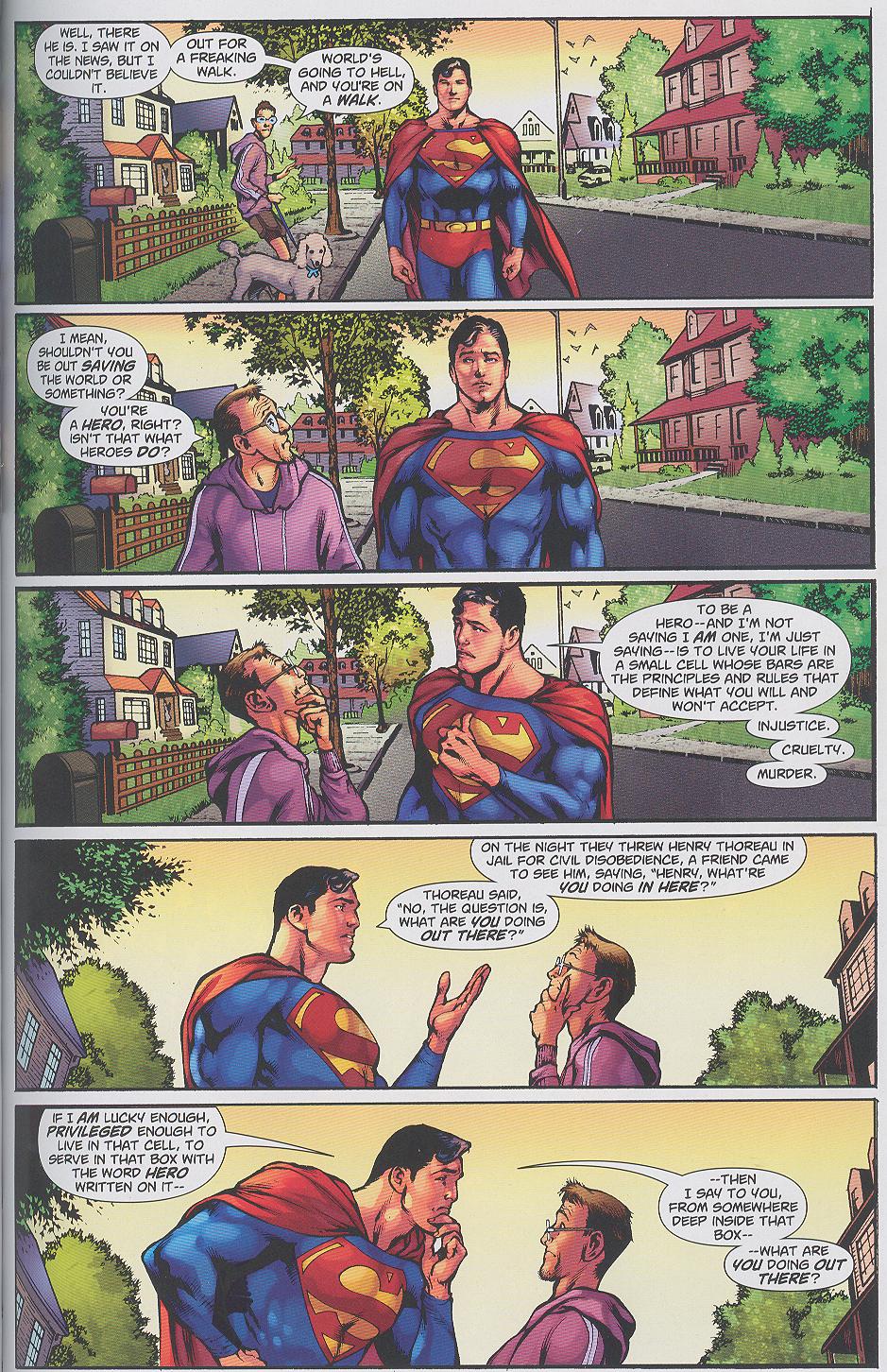 It's a strange take on Superman. I get that the writer is trying to make Superman a "man of the people" by having him talk to regular people. This is not how you do it. There's also a setup where Superman runs into an abusive father and saves the child and wife from them. And then he looks out into the panel, looks right at the reader and says that anyone could have saved them, if they had "ten cents' worth" of compassion: 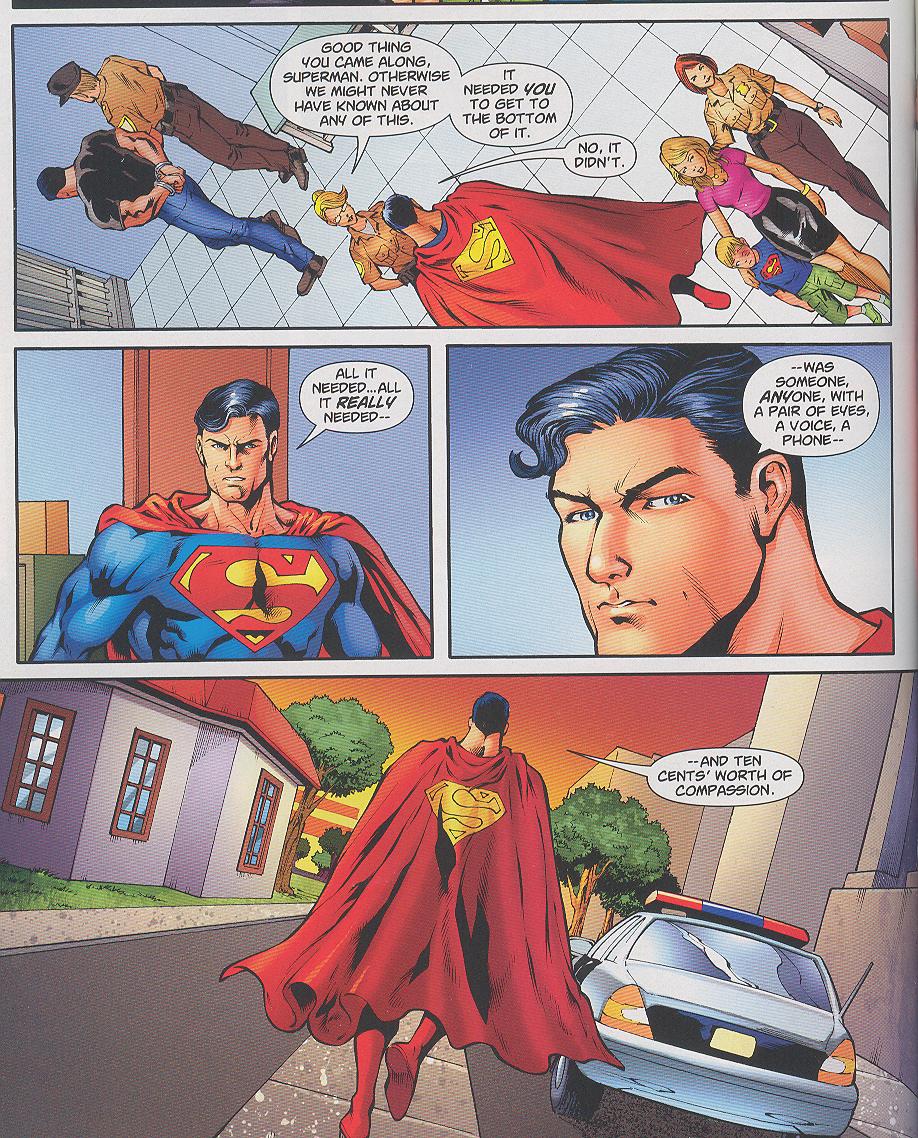 Superman, are you trying to shame me for not noticing this kids' abusive father? What kind of message are you trying to send here? I would say the entire trade is like this. There seem to be places where the writer knows what he's doing, and then these odd moments that are way off and fail to do the character justice. It's a shame that the creative team didn't live up to the hype.

Have you ever wondered where to pickpocket Superman? Wonder no more! In Grounded we discover where the Man of Steel keeps that sweet dough: 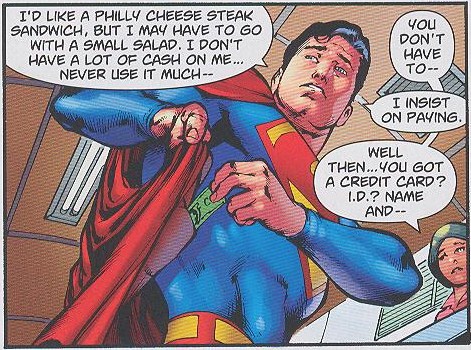 Check out this sweet Dave Gibbons-drawn scene, after Superman is freed from the Black Mercy and finds out that Mongul was responsible for it, and beating on his friends: 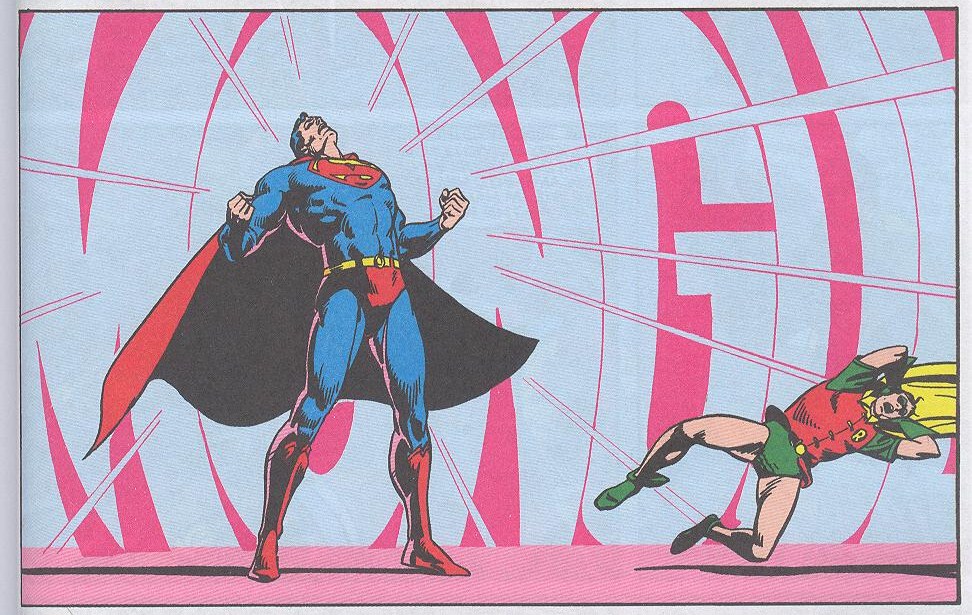 Next week: Captain America: Death of the Dream and Predator vs. Judge Dredd!