Bemoan all you like about the decline of Jeph Loeb's work on titles such as Ultimatum or Red Hulk, you can't deny the footprint he's had on Batman. So much so that, in the 2014 printing of Dark Victory, the co-writer of the Dark Knight trilogy, David S. Goyer, writes the introduction! This is a direct sequel to Loeb and Sale's previous Batman crime drama, The Long Halloween, so click over there if you haven't read it before.

Like its predecessor, Dark Victory focuses on a series of crimes committed on American Holidays, and this time, the crimes are murders. . . murders of Gotham City Police officials/former officials! After a breakout at Arkham Asylum frees the likes of Freeze, Ivy, Grundy and Two-Face, Batman has to track down who's killing Gotham's finest and leaving what appears to be Harvey Dent's M.O. There are direct follow-ups to The Long Halloween and Dent's suffering, so make sure you read that before you read this. 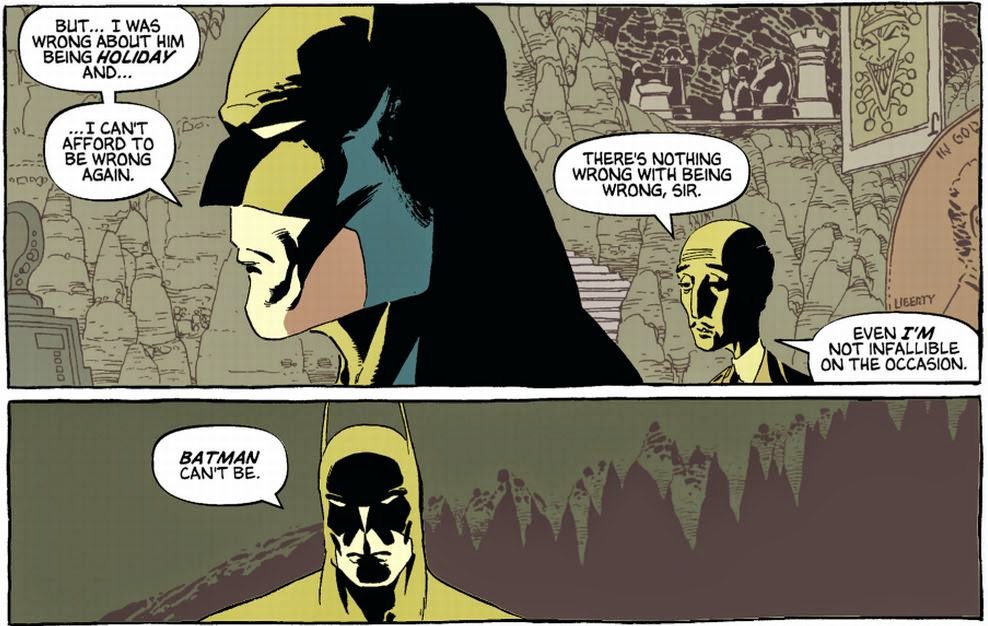 Themes include the lonesome suffering of Batman, the evolution from organized crime into super-crime reflected in the war between mob bosses and supercriminals, and Batman as detective. It's a little slow-paced to be reading over the course of the year, but it's slightly better to read as a single graphic novel. 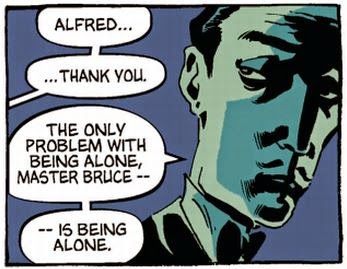 I don't think there's much I need to say to convince you to read this. You can always find it at your local library; it's on most of DC's must-read lists and usually makes the top 25 for Batman stories, so I won't expend the effort. Instead, here are several scenes from the book that I enjoyed.

When Batman loses the ally of Harvey Dent in the war against crime, he falls deeper into himself. He spends more and more of himself in fighting crime, and it suffers in his interactions with people he cares about. He just lets Catwoman slap him. 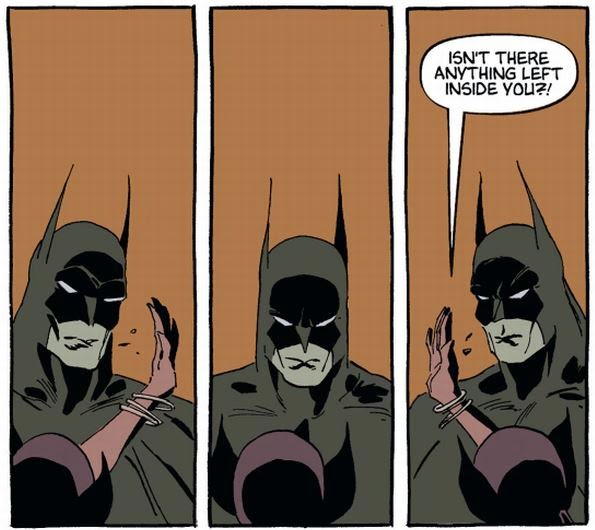 In the few times that you get to see Bruce Wayne, he's late for a Thanksgiving dinner, and this is a dinner that Alfred had arranged for him to have with the flirty, Selina Kyle. They have a huge dinner table separating just the two of them, and it's a small vignette of the affection that she offers. 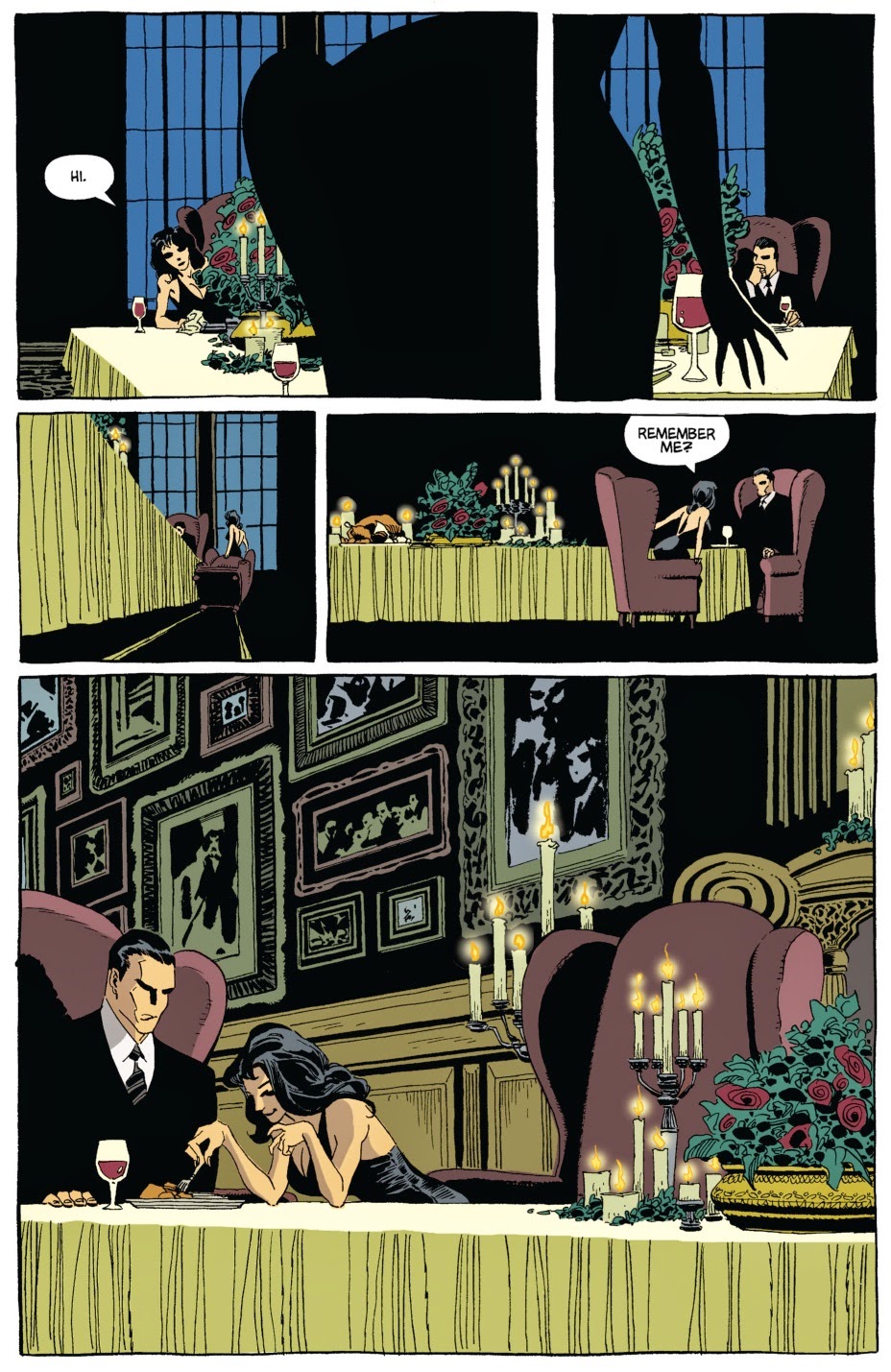 The colors don't get any stronger than in this frame! When Batman hounds after the escaped Two-Face and finds a light beneath the sewers, in contrast with the dark of the raining night. 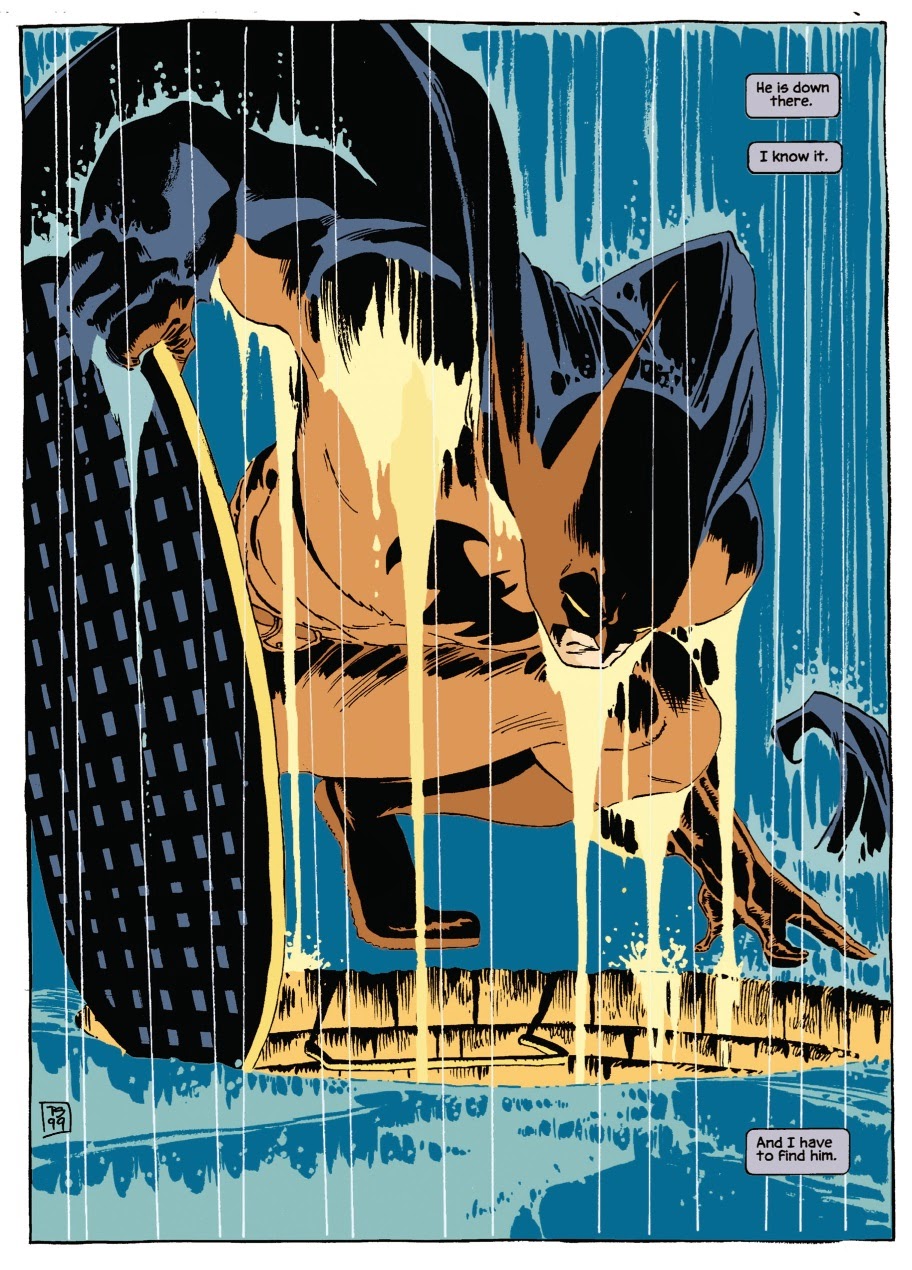 Black and white are rarely used in the story, and this might be the only time that it's used so powerfully. You really get a sense of what Batman is dishing out when you read this. 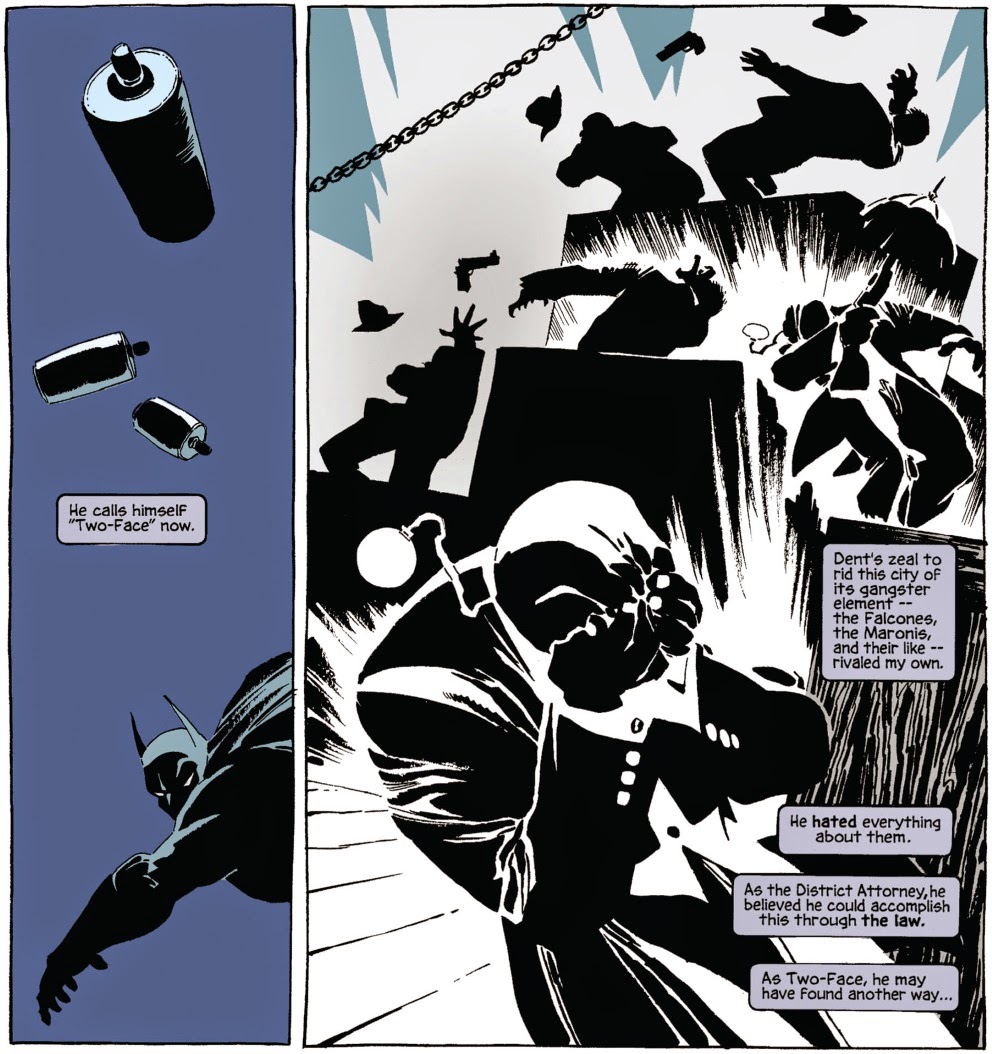 I've never seen the Penguin drawn like this. It's really odd, and I was fixated on it for a bit. His sharp teeth and mouth are exaggerated to look like a watermelon! 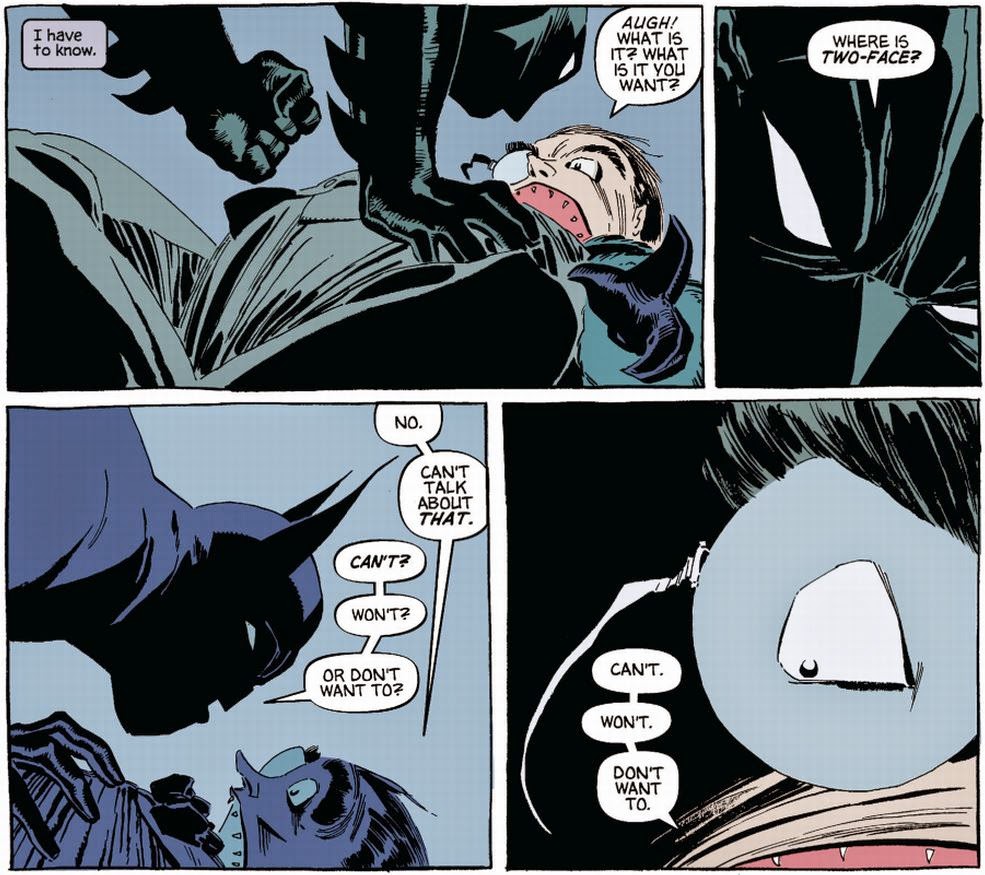 Again, I'm cherrypicking a scene where you see Bruce Wayne, and here his face is the main show. It's a sympathetic face that shares the pain of orphan Dick Grayson, and wants to help him recover from the loss of his parents. 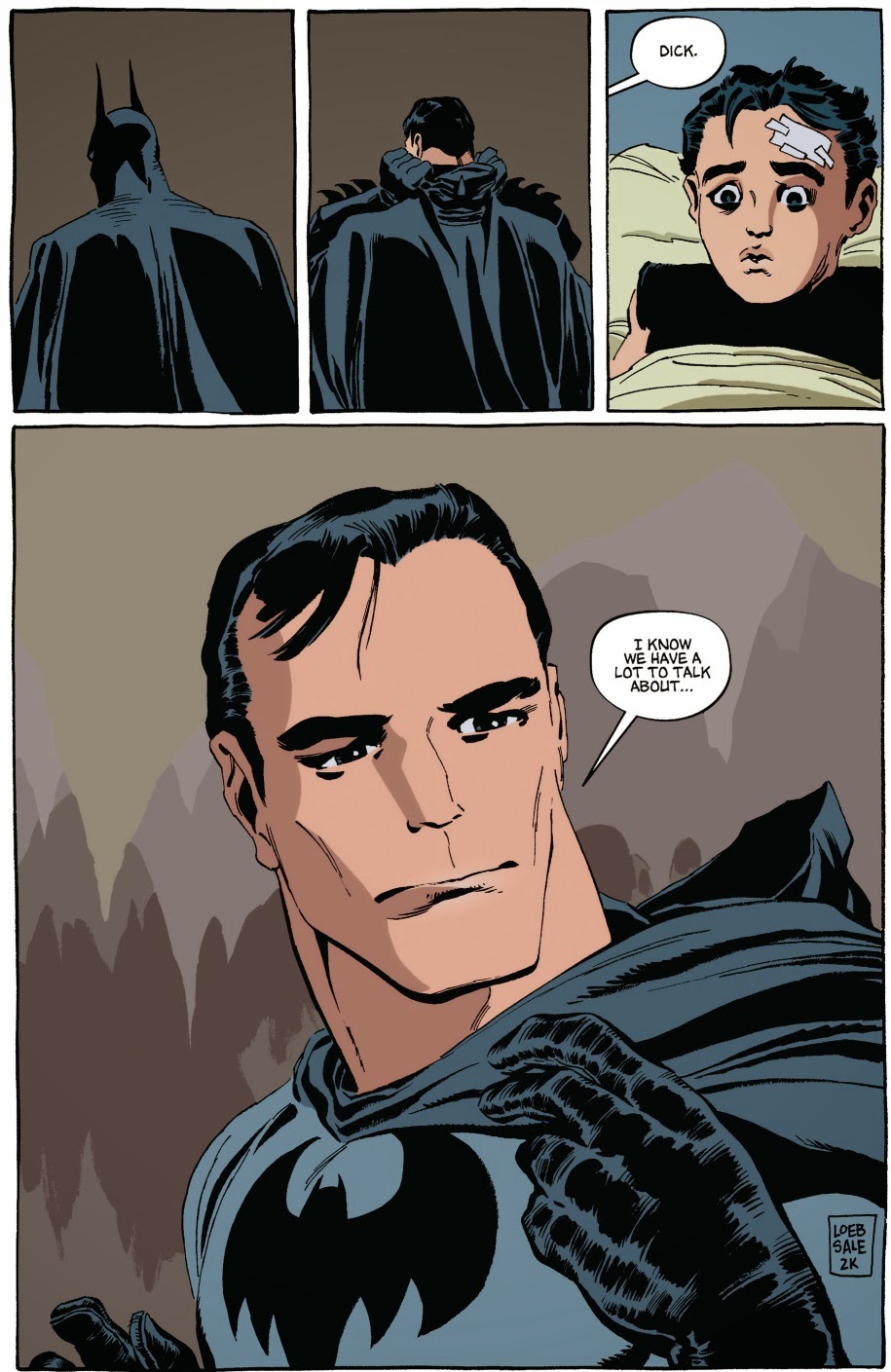 In the last action scene of issue 13, some of the criminals run into the Batcave, and Dick has no choice but to reveal himself and defend it! The two of them take on the Joker and Two-Face, and succeed. Afterwards, Batman bombs the cave to seal off the villains' entrance and christens the Boy Wonder, "Robin," after a nickname given to him by his mother. 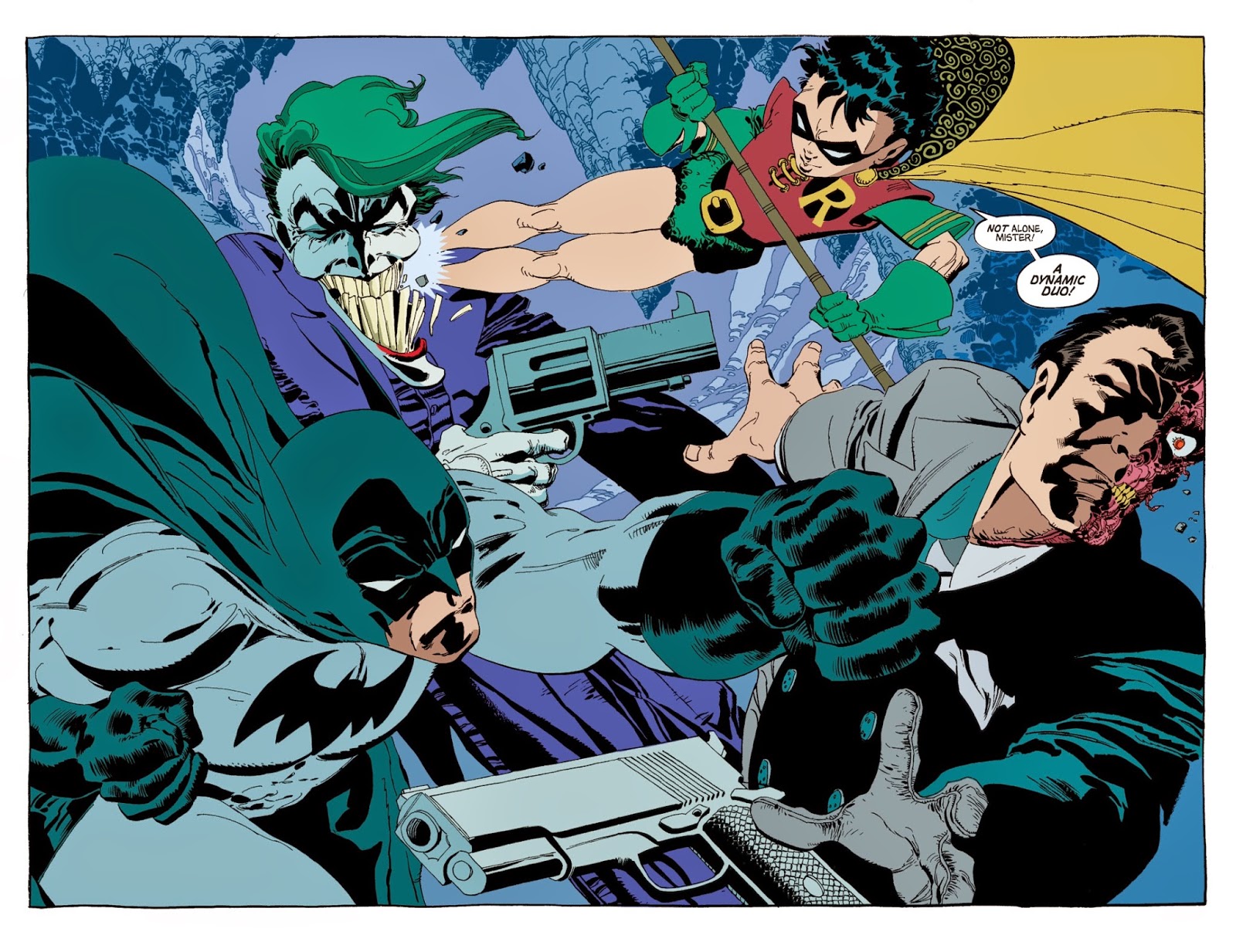 Good observation. Loeb did some really good Batman stories but in recent years his work as been less than stellar, to put mildly.

I read Dark Victory years ago, perhaps it's time to re-read it now.