Singles: Clear, We Have Demons, The All-Nighter, Snow Angels, Night of the Ghoul

What is this, pilot season? Anyways, I found out you get a bunch of "free" digital comics via an Amazon Prime membership, so I decided to give them a whirl and see what stuck. There's some big names on these "comiXology originals," so it seemed like a good way to get more of my favorite artists.

Clear #1
by Scott Snyder and Francis Manapul
Snyder and Manapul create their version of a Surrogates-style dystopia -- only instead of everyone hiding away inside their robot bodies, everyone is hiding behind a "veil," a digital filter that virtually repaints the world around them. Want to live in the roaring 20's? Boom, now that hobo on the street is a swinging dancer. Prefer the future? Boom, the rats eating the garbage in the alley are cyberpunk raccoons now.
The main character Sam Dunes is this hardboiled P.I. kind of guy tracking down "black" veils, illegal filters being sold when he finds out that his ex-wife has been murdered. Unlike the rest of society, he still chooses to view the world with "clear" eyes without a veil, along with one of his clients, an obvious femme fatale character. 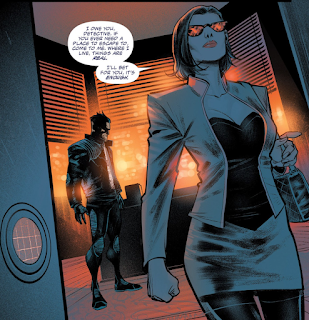 It's got the trappings of a decent neo-noir cyberpunk murder mystery. And honestly, I can't say no to Francis Manapul's art anyways. I wonder why Brian Buccellatto isn't on his colors anymore, but they're gorgeous all the same. Cool blues appear in the morgue, and the ending scene is encased in this beautiful sunset orange. Here's the highlight of the issue, when Sam is injected with a black veil meant to take him off the trail of the illegal dealers. He begins to hallucinate a whole set of weird veils while chasing them down. 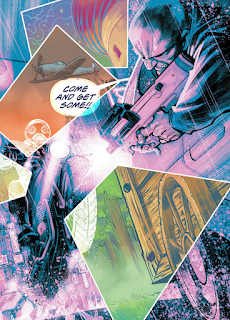 We Have Demons #1
by Scott Snyder, Greg Capullo, and Jonathan Glapion
Man, Amazon can't get enough of Scott Snyder huh? We Have Demons centers around Lam, a snarky teenage girl from Florida: the issue is about her finding out that her pastor father is actually a demon hunter -- and when he dies, it's up to her to take over the family business. 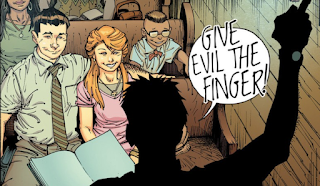 Think Buffy the Demon Slayer. The one thing that makes this series stand out is this whole creation myth story about the "halo" and the "horn." The lightest element in the universe, and the heaviest element in the universe, meant to somehow scientifically represent good and evil. If anything will give this series legs, it'll be how they flesh out this universe. And how many Liam Neeson jokes they can pull off. 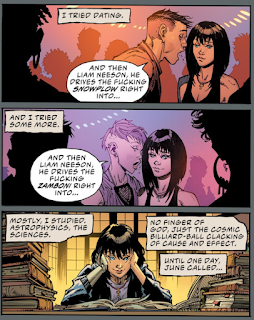 Snow Angels #1
by Jeff Lemire and Jock
This single issue is about a girl's twelfth birthday on a hunting trip with her dad and sister. It's some kind of sci-fi snow world dystopia where they can only stay in the "trench," this seemingly endless trail of ice below the surface.
They come back from the hunting trip to find their whole village murdered by the "snowman," and that's pretty much the issue. It's clear this series was meant to be binged rather than read serially. If I have any feelings about it when I read the collection, I'll let you know.
Night of the Ghoul #1
by Scott Snyder and Francesco Francavilla
Now this is a #1 issue! Snyder really shows his range here and Francavilla is the perfect artist for this suspenseful horror comic. It's about a father and son who drive through the woods to this secret hospital nestled away in the dark. The father makes up a story to see one of the patients, this decrepit-looking old man to profess his love for a film that the man directed, originally lost in a studio fire, "Night of the Ghoul." At first the flesh-faced man denies it, until he realizes it's too late and has to let the father in on the truth. 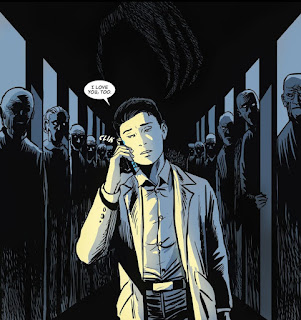 All the while, we get these burnt-reel panels of the lost film playing in between the real-time scenes, finally ending in a climactic attack of the ghoul. The son makes a call to the mother, telling us that there's some things they're not letting us in on, and it's icing on top of a suspenseful, immersive cake of an issue. This is a horror comic done right.
The All-Nighter #1
by Chip Zdarsky and Jason Loo
Just your average everyday comic book super hero -- except this one's a vampire. That's pretty much it, with the added wrinkle that there's these things called "the takers," some kind of organization that will kill you if you ever reveal to humans your true nature.
The art itself is standard superhero fare.
Follow chezkevin on rss | twitter