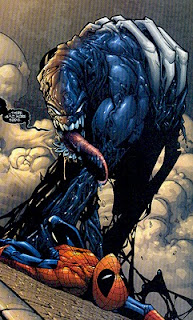 Check out this wicked splash from Spectacular Spider-Man #1. The symbiote's separated from its host, and it's taken on the form to beat down Spider-Man. Notice the "ribs" on its side -- that's actually Venom's symbol, given shape on his back. How cool is that?

My local library's come through with a last few of my holds, and I couldn't help but share them
with you.

Collecting the first five issues of The Spectacular Spider-Man, Jenkins spins a mystery in NYC over the "vampire killer," a being that kills New Yorkers by attacking their adrenal gland. Given the big dude on the cover, it's pretty obvious who it is, so Spidey has to struggle to help NY cops figure it out while Eddie Brock struggles against his own demons. In the issues, the story is Peter's as much as it's Eddie's. I think it's paced pretty long for how it ends, but important changes are made to Eddie Brock (DUDE HAS CANCER), and it's dealt with reverence. Ramos on pencils is highly stylized, but fun when you get used to them. As a Spider-Man fan, I think this is an important piece of comic book, but as a regular person, it's passable.

This thing totally came out of left field! And it's awesome! Each issue collected tells an individual story, mashing the Marvel Universe with classic fairy tales, ie: She-Hulk as Dorothy with her companions Captain America (cowardly lion), Iron Man (tin man without a heart) and Thor (scarecrow). Being immersed in comics as I am, it was a hoot figuring out which character from the fairy tale is which character from the Marvel U. I imagine it'd be the same for fairy tale readers too, so this would be a great book for casual readers. The trade collects all four of the Avengers Fairy Tales miniseries, but only issue 1 of Spider-Man Fairy Tales and issue 2 of X-Men Fairy Tales. It turns out that the X-men one's my favorite.

The story's from Cebulski and Kyle Baker, based on the African tale, "The Friendship of the Tortoise and Eagle." At first read I had no idea who the tortoise and the eagle were supposed to be, just that the tortoise had a big "X" on his shell, and the eagle had these weird marks on his face, kinda like a helmet. A helmet. . . to keep out telepaths. Only after staring at the first page for a while did I get it - and it was like BAM! It's a whole new story! The two are Magneto and Xavier!

Here's a summary: Eagle's family was brutally slaughtered in the camps of Auschwitz, so he bears a great deal of demons in him. Compassionate tortoise, loved by his family but ultimately shunned for his red "X," sacrifices himself to save his family from eagle's attacks. The two bond over their loneliness, but after eagle murders in order to save turtle, he can't bear to stay friends, for fear that he'll lose control. Turtle refuses to quit and vows to help eagle keep his demons at bay. Angered by Turtle's efforts, eagle grabs turtle and drops him from a mountain, cracking his shell and literally breaking his legs turning him into a paraplegic.

The folktale illustrates this tragic relationship between eagle and turtle, and it's incredibly compelling to me. In light of the X-Men film this summer, it goes even deeper. Here're these two different people, completely different backgrounds, yet they work together and combine their talents for the greater good. Who doesn't want to see them win? Why can't they win? Why can't eagle be friends with tortoise???

What really made this stand out from the others was the art. The other stories had a dozen characters to introduce, and a lot more dialogue bubbles. Having only two characters, the art is allowed to breathe, and you can tell so much from tortoise's eyes. Comic books are visual and this thing is a feast for the eyes. Check out eagle's fury: 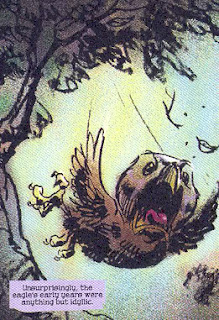