Azarello and Chiang bring in a new Wonder Woman for 2011! They don't bother to tell any origins about her, and just dive right into a story about the gods. As it turns out, Zeus has gone missing and Apollo tries to figure out where he's went. Meanwhile, Wonder Woman has to protect this human named Zola from a pair of minotaurs. You get the idea that something's amiss in the Greek pantheon, and Wonder Woman and Zola will get caught in the middle of it. The plot is real sharp and the pacing is pretty good for a first issue. J. Caleb Mozzocco has an excellent review on the issue, saying that it's a good comic book, but it's a bit too gory to appeal to everyone. I think the issue is accessible to new, non-comic book readers. It's just that I certainly wouldn't hand it to any small child. Yikes.

There's a great scene where Wondy's on the floor, and a minotaur's about to stamp her. She flips up and grabs him in a leglock, and headbutts him into submission! YEAHHHH. Count me down for issue 2. 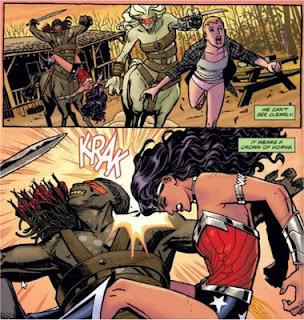 This is a comic book's comic book. Flip through any page of the book and you'll find the subtle emotional beats in the characters, or a dynamic panel of Captain America punching a dude in the face. He does it in every issue, but it never gets old! It's sheer fun to just look at the pages, and that's how any comic book should be. Issue 3 has one of my favorite sequences. The Ameridroid, a giant android in the form of Cap'n America with the consciousness of a mad Nazi scientist attacks Cap and Sharon. Taken by surprise, Sharon throws Cap his shield. 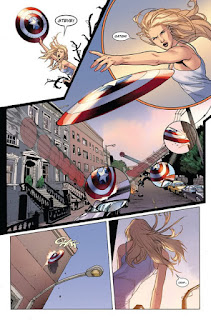 I am not above inserting sound effects. That is how much I adore this title. There's so much life in each panel, and it'll be a shame to see McNiven and Ponsor leave after issue 5. They don't get paid enough.

Plot-wise, each issue moves the story along inch by inch, with always an action sequence to spice things up. Slowly you see a ghost from Cap's past, making these small, calculated attacks on him, and slowly - you see his plan working! By the end of issue 3, we're hangin' on a cliff as to Cap's fate! It's great super-comics.