Superman: Earth One
by J. Michael Straczynski and Shane Davis

Back in 2010, DC Entertainment decided to retell the origin of Superman, in a new way, all over again. The contents cover Clark Kent as he "graduates" from Smallville and seeks a job in Metropolis. Conveniently, an alien invasion occurs there forcing a Superman to rise and stop them. In the chaos, Daily Planet journalist Lois Lane and photographer Jimmy Olsen bravely enter the fray for news coverage. Their courage inspires Clark to become a reporter. The end.

There's a great line from Jimmy Olsen about how the truth is worth dying for, but there just isn't anything new in this graphic novel. Sure, we get a glimpse at all the other jobs Clark could've taken, but that adds very little to the mythos. At least Waid added post-9/11 hysteria to his take on Superman's origin. And when you get to the alien invasion, everything seems bland and written five times over in previous iterations. But look! He's wearing a hoody! He's relevant now!

This was meant to appeal to new readers. Nuts if I know whether it succeeded or not, but to me, it's a failure.

Well willya lookit that. This anthology has over 25 creators from indie, web and online comics bringing their own talent to creations like The Inhumans, Iron Man and the Hulk. It's amazing to wrap my head around.

As with all anthologies, some stories are better than others. The Punisher threatens a kid to straighten up in school, and he ends up graduating from Harvard with 54 different degrees! M.O.D.O.K. makes friends with "Donnie"! Many of them are delightful stories that couldn't occur in the Marvel Universe proper. One of my favorites is Dash Shaw's "Dr. Strange vs. Nightmare," in which Dr. Strange fights to stay awake. 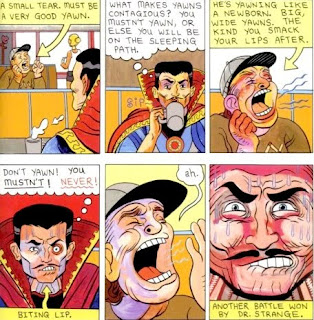 Hah! Good stuff. There's another one from Paul Hornschemeier on the Molecule Man, a ridiculous villain from a Fantastic Four book back when Stan was doing it. The story's actually insightful, explaining the ennui that comes with the ability (the curse?) of viewing the world in its basic elements. It's a thoughtful, literal take on one man's life in the Marvel universe. The latter half of the hardcover contains The Megalomaniacal Spider-Man, which is a What if? style story that goes way off on its own track.

All in all, whoever you are, you'll find something to like in this anthology. It's just highly unlikely anyone's ever going to read through this, because comics are obscure enough as they are. 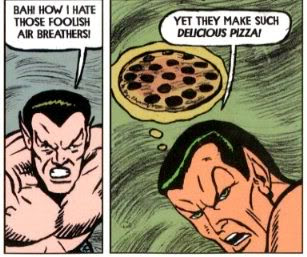 This is usually out of my range of comics, but it doesn't hurt when your friends lend you things! There are just a bit over 200 pages in this digest-size trade. Each page or 2 depicts a small moment in the author's life with one Theresa. Put together, they depict all the honest, awkward moments of a long-distance relationship. It's pretty excellent, with scenes like them playing air hockey together, or them sleeping with each other. Apparently this was Jeffrey's MFA Thesis project, which launched him into other works. Crazy!