On the Flash and Freedom 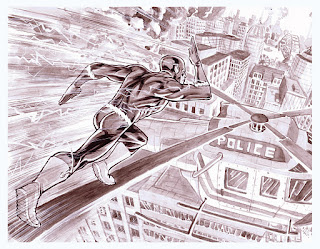 Just look at this image! Click to enlarge. It's amazing. I jocked it from the DCU Source blog. It's my new desktop and all I can do is stare at it. Forget about writing up my resume or looking at applications for jobs. This is all I need!

This one image is representative of comic books as a whole. No other medium could portray this scene in so fluid and clear a manner. In film you'd have to slow it down. Prose would straight up sound silly. The Flash is running on the single blade of an airborne helicopter. How cool is that? 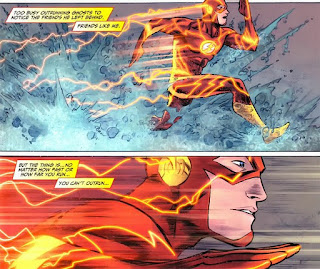 Check out this image from The Flash #1 (2011). Ganked from the Comicsalliance blog. After diving into a pond, Barry Allen grabs his Flash ring and dons his costume. He pumps his legs and emerges from the water in a surge of energy. Nature itself is parting for his way. It's beautiful. This shows that nothing can hold him. Nothing can stop him. As long as he has his own two legs, the Flash is free.

It's this concept of freedom that appeals to me so much. The Flash has no limits, the same way Manapul and Buccalleto have no limits in their ideas for the title. The next ish is out in the coming week and I couldn't be more excited. I've fallen in love with comic books again.

Email ThisBlogThis!Share to TwitterShare to FacebookShare to Pinterest
tags: The Flash