Batman: Hong Kong (Oct. 2004, 128 pages)
by Doug Moench and Tony Wong
collecting I have no idea the book doesn't credit anything and the indicia is as helpful
$17.95, Amazon

A series of webcam-murders leads Batman to Hong Kong, who inspires one Benny Lo to don the cowl of. . . the Night Dragon! With nunchuks! This reads a lot like an action film, and that's fine. The plot isn't deep, and it doesn't need to be. It's all about showcasing the action shots. Check 'em out:

THRUNCH! It's Batman THRUSTING a PUNCH in your face! Pregnant women cried tears of joy at the conception of this panel. It changed my life.

In this one Batman cloaks a thug in his cape, and proceeds to knock him out through the cape: 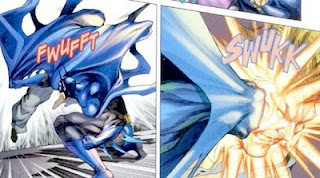 Check out Tony's design for Batman's cape. It's this single piece with crazy long tendrils everywhere. It makes him look even more like a spectre in outline: 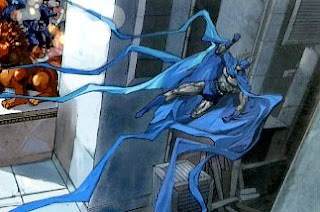 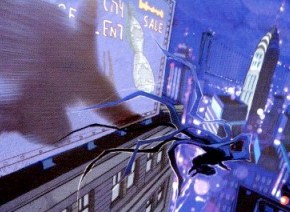 Hotcha. The Night Dragon has these nunchuks, and Wong draws them in a way that shows their spinning, that makes it appear as if they're defying the laws of space and time. 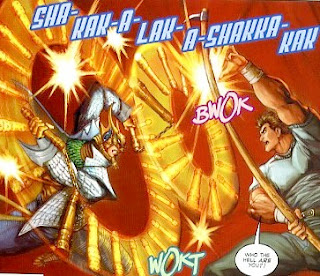 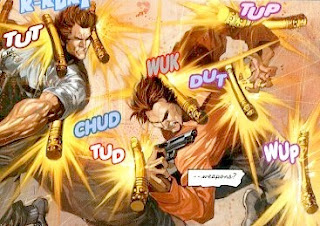 Only in comic books folks. A nice, fluffy read. 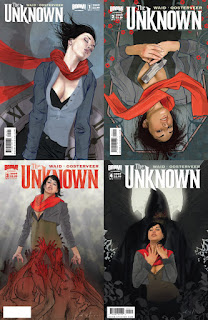 Catherine Allingham is a world-renowned detective who takes on cases of the supernatural. She's absurdly intelligent and eccentric -- a modern day Sherlock Holmes, with breasts. In the first issue she even takes on a partner, her very own Watson.

Catherine also has a malignant tumor in her brain, and has six months to live. After the world's first quantum crime in a Viennese research facility, she and her partner are called to investigate, and the mystery involves the very nature of life and death itself. The mystery takes her across Europe to a confrontation in Europe.

Waid is great at representing Catherine's drive for knowledge, her compulsion to know the unknown. She's an exciting, tragic, compelling figure. The above image, from the second ish, really highlights their chase to know! I highly recommend the first two issues, but not the last two: in #3, her partner holds her back from a momentous discovery. He literally tells her not to open the door -- and that just goes against everything that the comic is aboutt. The 4th issue somewhat makes up for it, but not totally.

Regardless of the conclusion, Catherine is a compelling character in comics who finds crazy, creative cases in the world, and I recommend you give the first issue a shot. It's free!