Dial your bat-phones back a year or three, and you'll remember that Batman - Bruce Wayne - died, in Grant Morrison's Final Crisis. After a big hubbub in "Battle for the Cowl," Dick Grayson (the first Robin) took the cape along with Damian Wayne, who became the fourth Robin. Batman & Robin: Batman Reborn tells the first six issues of their story with Grant Morrison, Frank Quitely and Philip Tan. Frank Quitely does art duties for the first three issues and Philip Tan does the next story. The first arc revolves around Dick and Damian stopping a carnival-inspired gang of criminals from waging germ warfare on Gotham City. The big draw of this arc is. . . the drawings. Frank Quitely practically inks sex right on the page. Who is insane enough to draw in so many drops of water in a single panel? And when the Batmobile boosts off on the road, who draws the smoke clouds behind it, literally saying FWSHHHHH and still looking like smoke clouds? The guy is amazing. Following him, the second arc drawn by Tan looks way sloppier but follows the escalation of supercrime and a new dynamic duo to replace Batmam & Robin. It's great stuff. If you haven't read 'em, don't miss 'em!

This summer I went to sunny Los Angeles to visit my sister, and I spent a day at UCLA. You know what happens: I went straight to their library and cozied up with a few comic trades, one of which was The Best of the Fantastic Four, vol. 1. I'd already collected all 27 issues of Roberto Aguirre-Sacasa's Marvel Knights 4 and thought I'd had enough of Comics's Greatest Family, but when I came back home, I guess not! My local library had Essential Fantastic Four vol. 1 (first print!!!), collecting the first 20 issues of The Fantastic Four from Stan Lee and Jack Kirby, as well as the 1963 annual. It took me a full 3 weeks to complete it and I loved every minute. 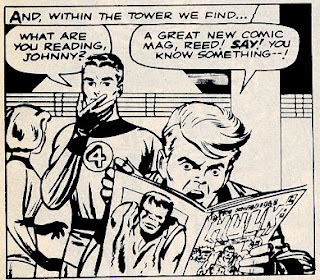 Stan was just starting as a comic book monkey, and it's such a joy to see his whimsy and imagination in comic books. Take Doctor Doom for example. In his first appearance, he kidnaps Sue Storm and forces all the others - not to grovel before him, but to straight up travel back in time and steal Blackbeard's treasure! They do it and successfully board Blackbeard's ship and, because the three took up pirates' disguises, the Thing is so huge and burly that the pirates mistake him for Blackbeard himself! They freakin' travel in time and make history in one issue! Then, when Doc Doom finds a way to magnetically lift the Baxter Building into space, Prince Namor the Sub-Mariner saves them, and the good Doctor Doom is left hurtling into space! But it doesn't stop there! He finds a civilization so advanced in space that they have no need for war - so he freakin' conquers them and uses their technology to go back to Earth and destroy the four! And I don't care if the trades are in black and white! Jack "King" Kirby draws the heck out of it! I feel like the last half of the book is more overwritten than the first. It is no fun to read a comic in black and white, when the pages are 9 panels a page! But it's always a hoot to see what they'll come up with next. I've read quite a few Essentials with my free time, and The Fantastic Four aren't the typical super-comics, even though it spawned a new era for them. The comic's not about a new villain a month, but about a family with kooky powers who explore all sorts of weird places in the name of - imagination.