The Vision: The Complete Series and Aliens: Dead Orbit

I snatched up this digital trade on an Amazon sale for a pretty penny priced at $2.60 and only just now got around to picking it up. It collects all 12 issues of the 2015 series by Tom King, Gabriel Walta and more. It was critically acclaimed, and after watching a few episodes of WandaVision, I got curious enough to pick it up. It's about the Vision who moves to a suburb in Washington, D.C. to be closer to his job as the Avengers liaison to the government. To learn what it means to be human, he manufactures a family for himself, Virginia his wife and his children Vivian and Vin. The creative team called it "Breaking Bad Vision," but in my opinion it's more Desperate Housewives meets Avengers. Somebody gets some skeletons in their closet, and I'll leave it at that -- read it for yourself. You won't regret it.
The dry, deadpan narration underscores the drama and tension under the surface just like the fantastic world of superheroes meets the mundane life of suburbia. It's a uniquely grounded comic that makes Vision, a synthetic android of all things, the emotional core that you invest in. 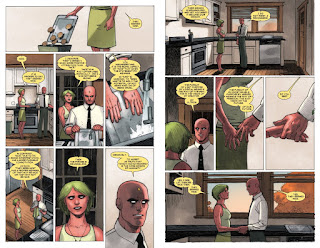 There's 100's of pages of bonus content that's honestly kind of difficult to read on a desktop screen. I binged this all in a couple days, but this series would have been great to read in single issues as well. There's a 6-ish page visual storytelling analysis by Hassan Otsmane-Elhaou that points out a lot of visual cues that you may have missed in individual issues. Things like how the framing of the comic panels evokes the prison of the home, narrowing the possibilities for the Vision's family. How the coloring changes depending on the mood, and what the seasons signify for them. It reminds you that the story isn't just a script...like Gabriel said in a bonus section, they're "writing with art." Highly recommended read or re-read if you've already done so.

Fans of the Aliens movie franchise won't be disappointed with this 4-issue miniseries from Orc Stain's James Stokoe. It's about a Waystation in space who attempts to hail an anonymous ship in their same orbit. They board the ship after no response, find 3 passengers in cryofreeze, along with a couple of other passengers. If you've seen any of the movies, you know what happens next.
The comic itself focuses on the last survivor from the crew, and juxtaposes his current plight against what happened to the rest of his crew. There's a genius sequence where, in a moment of weakness he picks up a pack of cigarettes when he needs to escape his pod, and a xenomorph attacks him like they did his crew previously. It's the colors that separate the two attacks apart, even though the panels are meshed together. 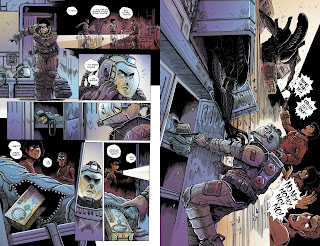 Another sequence early on where the main character gets rick-rolled by a jumble of cables and tanks. 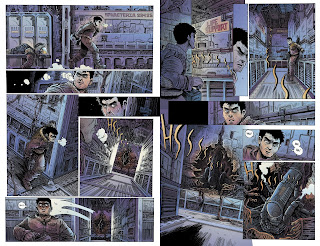