The Flash: A Celebration of 75 Years

Collects Flash Comics (1940) #1 and 104, All-Flash (1941) #31, Showcase (1956) #4, Flash (1959) #110, 123, 125, 174, 215, 233, and 275, Superman (1939) #199, Crisis on Infinite Earths (1985) #8, Flash (1987) #0-1 and 225, Secret Origins (1986) Annual #2, Flash: Fastest Man Alive (2006) #1, Flash Rebirth (2009) #1, Flashpoint (2011) #5, and Flash (2011) #9
Whew!
Sometime in the 2010s, DC kicked off their 75-year anniversary, and the anniversaries for several of their characters. Part of that was the "A Celebration of 75 Years" line, luxurious hardcovers meant to encompass story highlights from 75 years' worth of storytelling. Being a Flash fan myself, I couldn't wait to snap the hardcover up. What classic Flash stories have I missed? What are the must-reads from the silver age?
This book is divided into 5 parts, each from different "eras" of Flash stories. There are forewords for each section, much appreciated and very helpful for explaining the context that these stories took place in.
Part I: The Fastest Man Alive
These stories introduce you to the original Flash of the Golden Age, Jay Garrick. He gained his super-speed powers due to an inhalation of a "hard water" gas mixture, giving him the ability to run at super-speed and match the speed of even a speeding bullet. It's this ability that allows him to save a fellow college schoolmate Joan from an assassin, and it's how these two eventually fall in love.
Highlight: "The Planet of Sport" story told in All-Flash Comics #31. The Flash and gang are teleported to a planet to participate in gladiatorial style combat for sport. The Flash showcases just how versatile his single super-power is, and bests them all to save his friends.

Part II: The Human Thunderbolt
Barry Allen welcomes you to the Silver Age, an era of imagination, optimism and unchecked pseudoscience. It's here where they establish not only a character-defining trait, but a universe-defining trait of the DC Multiverse. Barry is the first to "discover" and meet the alternate universe of his hero Jay Garrick, whom he previously only heard of in his own comic books. Other highlights include his race with Superman in Superman #199, his out-of-this-world team up with Kid Flash in a "timequest" to save the past, in order to save the future, the origin of Kid Flash himself, and a battle against six of his rogues and an evil Flash from an alternate world.
Most of these stories are pencilled by the gorgeous Carmine Infantino and Joe Giella. The clean lines and expressions of these artists make for beautiful art and no doubt the visual highlight of the entire collection. 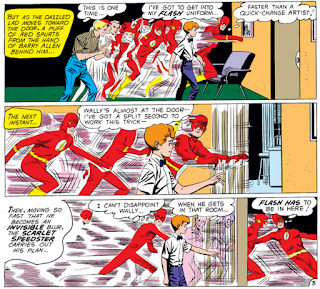 Every story in this part is worth the read in my opinion. It's here that you learn Barry Allen is the bridge to the multiverse, the connection between speedsters, and the reason he's the most popular Flash. Flash #174 caps this section, on an anniversary of Barry Allen and his wife Iris, where he reveals his alter ego to her: 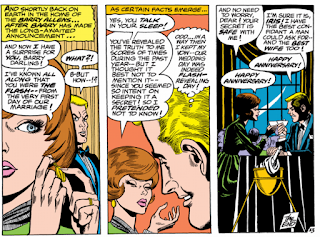 Part III: The Scarlet Speedster
The Silver Age is followed by, what else, the Bronze Age. American consciousness in times of the Vietnam War along with the repeal of the Comics Code gave way to darker themes in The Flash, such as adultery and :choke: even murder, culminating in Barry Allen sacrificing his life to save the Multiverse in Crisis on Infinite Earths #8. 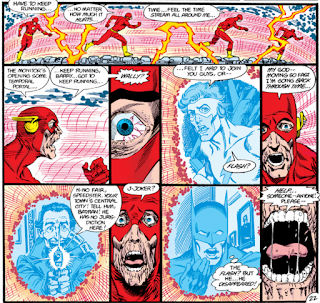 You were too good for this world, Barry.
Bonus highlight: Barry and Jay discover "Limbo" in this era, a world that protects the time stream...discovering the abilities of their speed powers to age themselves! 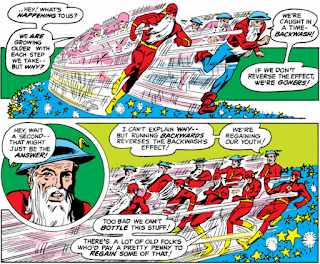 Part IV: Those Who Ride the Lightning
When Barry died to save the multiverse, publishers looked to other characters to fulfill his role. Wally was "de-powered" and disconnected from the Speed Force, previously having been able to run past the speed of light, but now, only just past the speed of sound. Most issues are "retrospective" issues, setting the table for Wally stories without really blazing any new trails. Now, his metabolism is accelerated and he has to eat an enormous amount of calories to maintain his powers, grounding him. 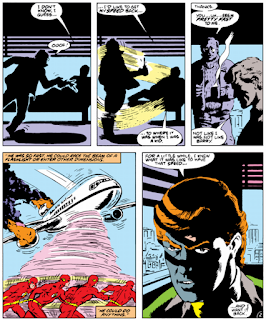 The Wally stories and Bart Story don't really go anywhere or explain to you where the character is at, and they're hardly a celebration of the character. You'd think that in all their years of publication, there would be better single-issue introductions to these characters' legacies as the Flash. This is partly due to the decompression of comics as you weren't going to get a full story in a single issue anymore, and the collection is worse off for it.
This part ends with the first issue of The Flash: Rebirth, another single issue that hardly tells its own story. At this point in the collection, there are just too many cliffhangers for you to be able to follow along appropriately, and it's more a potpourri of #1's to tempt you to read the actual collections, like the Flash by Mark Waid collections or the Impulse collections. This part could have been so much better and that's a shame.
Part V: Lightning Fast Action
The final part only has two issues, presumably because these are the comics that are coming right now and ones you ought to be reading already, eh? They're the final issue of Flashpoint, and the 9th issue of New 52 Flash, and they're gorgeous to behold. But again, they're only single issues of a larger story that you really need the Foreword to explain to you, and they are worse off for it. 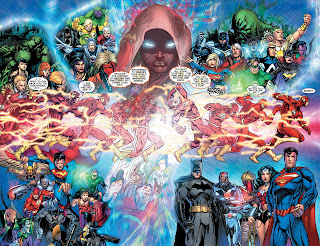 To read the stories of the Flash, is to read the stories of the DC Universe itself. It was the Flash who discovered the multiverse, the Flash who died to save the multiverse, and finally the Flash to birth the New 52 universe to life. Overall, that's the narrative of this collection, and it's one of the cooler ones in my opinion. The Barry stories are clearly the winners here, but they really should have done a better job with the Wally and Bart stories. They could have; they just didn't.
One of the other detriments is the single-issue format, when comics as a genre shifted over to more decompressed storytelling, yet this collection only includes single issues. To be hanging on a cliff is one of the worst feelings as a reader, and you're left with that feeling multiple times in this collection.
For Silver Age Flash stories, go no further than the DC Comics Classics Library: The Flash of Two Worlds and then The Silver Age collections. For Wally stories, start with the Flash by Mark Waid and then by Geoff Johns collections. Just don't start with this one.
Follow chezkevin on rss | twitter