Batman Adventures, Batman by Snyder and Capullo, JLA...sure, what's another Batman series to start? I have to follow my heart when I read, and there's always room for more Batman. Grant Morrison made his mark during the "British invasion" that matured the comics industry with series like Neil Gaiman's Sandman, and Alan Moore's Watchmen. He revitalized the JLA in the 90's making it the premier DC title, and in 2006 he was given the premier bat-title, Batman. He did a bunch of weird things with the Dark Knight, and it was pretty entertaining. What stood out the most to me was the introduction of Damian Wayne, featured in Batman & Robin with Frank Quitely. Mainly what I wanted to collect was this title, collected in Batman by Grant Morrison Omnibus Volume Two, but I couldn't exactly help myself. I got the full 3-volume set. So today, here's the first volume:
Batman by Grant Morrison Omnibus: Volume One
by Grant Morrison, Adam Kubert, Lee Garbett, Tony Daniel and more
For continuity's sake, here's the stories collected:
All things considered, the stories told make for one super-arc that begins with the first issue collected and ends neatly in the third-to-last issue, before the Final Crisis tie-in. The theme goes beyond the typical crime noir that you'd expect from modern Batman stories, and pays tribute to the adventures he's had in the past, while paving stories for the international set in the future. The author isn't afraid to dip into the supernatural and makes the title a jack of all trades, expanding the way we view the Batman. The man who's thought of everything, including even what he hasn't thought of! 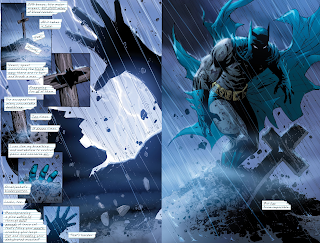 It's a shame that the art couldn't be consistent. Adam Kubert's lines are dynamic and action-oriented, perfect for the James Bond-style story that kicks it off. But fill-in artists like Lee Garbett and later the main artist Tony Daniel put in their perfunctory superhero art. Standard, with nothing exciting, and sometimes it's the script that has to do the heavy lifting. Like, what's going on in this page? Reading the art only confuses you; you'd have to read the words to tell what's going on. 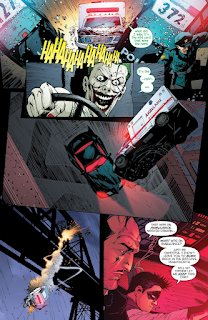 I suppose I only have myself to blame, but I purchased this edition in "Acceptable" condition on eBay and it came with the binding torn off. It feels like I'm murdering the book every time I open it, but it's stayed intact so far and doesn't affect the reading experience. It's an unfortunate way to keep these stories, but given the inconsistencies in the art itself, it was worth saving the extra $15. The cover art of the book itself is this neat double-bat icon, and I loved looking at it in my week-ish-long binge of the book. Page numbers are marked but inconsistently since the art often bleeds into the margins. 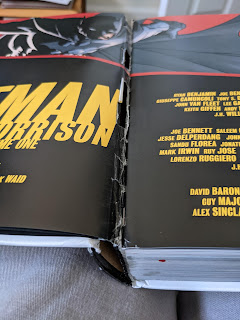 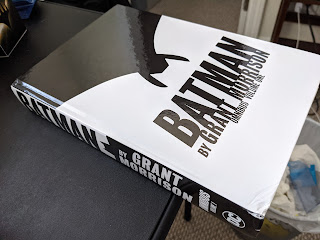