This collection contains a smattering of issues, mainly because they're all standalone stories for the most part, exploring from the start of Batman in the Zero Year, to the future of Batman in Batman Eternal. Supporting characters get a little more of the spotlight here, but that isn't to say that Batman doesn't get plenty of time too.
Stories range from the supernatural, as Batman encounters a demonic summoning of the "Will O' the Wisp" in "Ghost Lights," to high sci-fi when Batman stages his own breakout of Arkham Asylum in a demonstration on how to improve their security. The quality is high in every story, and not only does Greg Capullo kill it as usual in the Clayface story, other artists get a chance to shine. Mateo Scalera and Lee Loughbridge stand out to me as the artist and colorist for the "The Meek" story. It's a Hannibal-esque serial killer story with brooding colors and confident, sharp lines. I wouldn't mind reading a monthly from these guys, reminiscent to me of Sean Murphy's art. There's a three-page sequence of no words as he buries his most recent victim, that's just haunting. Especially in a series that usually has a lot of exposition and backstory. The art breathes! 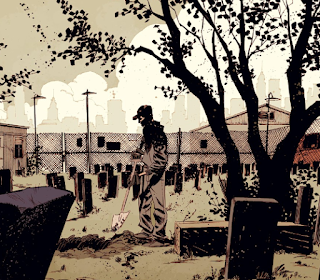 The most "on-continuity" story here is the Clayface story, told in issues 18-20. Clayface's mimicry abilities evolve to the point where he can copy the DNA of his victims, and eventually he copies Bruce Wayne's identity leading to a showdown between Bruce Wayne, and Batman. This is all happening in the context of Damian Wayne's death, AKA Robin and Bruce's biological son. It hits all the right beats, from the high-tech gadgets that keep Batman one step ahead of his foes, to the pensive emotions as Bruce looks through old recordings of his adventures with Damian. Gonna make a grown man cry here, when I just wanted to look at Batman punch people.
Capullo just kills it with Clayface. I could look at this guy's Clayface for days. Just look at the detail. 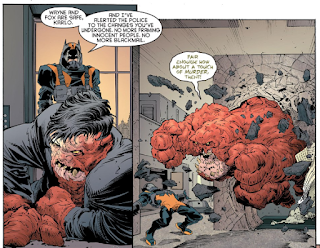 It's just so satisfying to read a title of consistent quality and with artists of high quality. Every short story does something different here, whether it's a story of hope seen in the first lighting of the Bat-signal, in issue 0, or the brooding mood of the serial killer in "The Meek." It's not one of the mega-storyarcs that we've seen before like with "Death of the Family" or "Dark City," and I wouldn't want this collection to be. This anthology is a brilliant way to collect the standalone stories printed thus far and I can't wait to read more.
Follow along for more New 52 Batman: