Batman Vol. 4: Zero Year -- Secret City
by Scott Snyder, Greg Capullo, James Tynion IV, Rafael Albuquerque and more
New 52's Batman continues with the line-wide "Zero Year" storylines...origin-style stories that give you a glimpse into the characters during their "0th" year. In Batman's case, Bruce Wayne returns to Gotham City after being declared legally dead, now a 20-something adult in the midst of a takeover by the Red Hood Gang, a gang of people who supposedly "court the wolf" by committing random acts of crime and violence. Enter a young Bruce Wayne who'll stop at nothing to be a thorn in his side.

The story is layered here, but really it's one of redemption. At first, Bruce Wayne refuses to come out in the public and reveal that he's truly alive. His uncle Phillip Kane does that for him, as the acting CEO of Wayne Enterprises. Over time, you learn what makes this Bruce Wayne tick, and why he cares about Gotham City. He started out as an angry young man, driven by the single trauma he suffered as a little boy. That drive is still there; that anger too, but through the events of the story they're tempered into efficient weapons.
The script for issue 21 is given at the end of the collection, and it explains that this isn't meant to be a gritty "Year One" like Frank Miller and David Mazzuchelli's noir classic. It's kind of crazy. Where "Year One" was dominated by grays and blacks, the final issue of this story is covered in reds and neon yellows of A.C.E. Chemicals and the morning sun. It's a new day for this Batman. Like I said when I read the first issue of New 52 Batman, this is a joyful Batman. And this Batman is just as real as any other ones. One of my highlights is during Bruce's debut with the batsuit. He strings up a gang of Red Hoods to create a bat icon on a billboard (also a gorgeous re-rendering of the cover of Batman's first appearance, Detective Comics #27). And he talks to the last one... 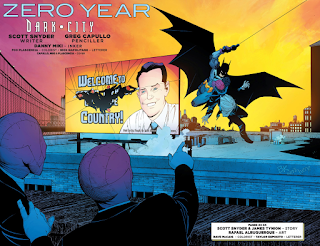 Zero Year is an action-adventure story with hints of sci-fi, and you see that with the different tools that Bruce Wayne employs: magnetic boots that let him hang on the ceiling, grappling hooks strong enough to hoist a truck. Especially cool is one of Bruce's toys from his dad: his so-called "witch's eye," a 360-degree visual mapper that young Bruce accidentally carries with him down to the cave that he fell in. It makes for an utterly brilliant re-telling of the "I shall become a bat" scene, when the visual mapper turns on in the mansion during Bruce's most desperate hour. 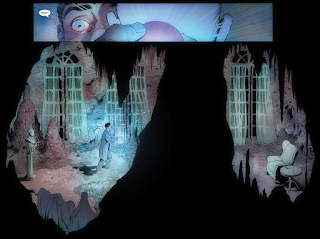 In all, Zero Year is a story of hope. Bruce Wayne's story is a dark one: he lost his parents in an act of random violence, but he doesn't wallow in the darkness. He brings in the light and where the Red Hood Gang evokes fear for the sake of evil in Gotham City, he evokes fear for good. One of the back-up stories from Rafael Albuquerque conveys this perfectly. In one of his training sessions, the "Queen" who has been hired to train him continues to throw more and more men at Bruce Wayne. He defeats them, but doesn't kill them, a point that the Queen is trying to beat into him. Eventually, her men simply refuse to go into the pit. In the assistant's words:

I'm sorry. They just won't. They're scared of him, ma'am. They're AFRAID.

The Batman doesn't need to kill to make a point. Fear is just as good. My favorite collection of the series so far. Read them all with me:
More New 52 Batman:
Volume 1: Court of Owls
Volume 2: City of Owls
Volume 3: Death of the Family
Volume 4: Zero Year -- Secret City
Follow chezkevin on rss | twitter