Trinity Volume 2: Dead Space
by Francis Manapul, Cullen Bunn, Clay Mann, Emanuela Lupacchino
Collecting issues 7-11 of the 2016 series. Issues 7-8 are "commercial break" issues, two separate done-in-ones presumably meant to set up future storylines. Issue 7 has the "evil" trinity of Lex Luthor, Ra's Al Ghul and Circe discovering the Pandora Pits and not much else. Issue 8 involves Superman talking with Batman and Wonder Woman about how he has dreams of fighting other versions of himself. It's basically a continuity circle-jerk that teases at an upcoming story that will somehow explain why there are so many reboots (maybe?). Either way, at least it resulted in this sweet spread: 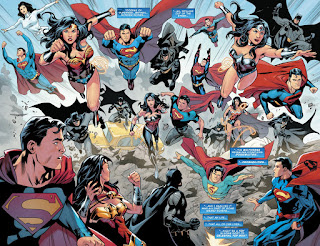 Both issues are done gorgeously by Clay Mann and Emanuela, in their own unique styles. But it's the latter 3 issues that you really want to read here: "Dead Space," written, drawn, colored and covered by Manapul for nearly all 3 parts. That's nuts! Those two commercial breaks allowed him to really stretch his legs on this story. It's a whodunnit alien invasion story on the JLA Watchtower with the very Earth on the line...but with a twist! I gotta say, this was masterfully told with each issue peeling a different part of the puzzle.
When the trinity splits up on the Watchtower, they each have a different task uniquely suited to their abilities. It's Superman who has to get outside and slow the Watchtower's descent into Earth. Wonder Woman discovers the truth about the aliens on board the ship. And Batman has to take Cyborg down to the escape pods to reboot him and restart the Watchtower. Check out this dope layout as they're making their way down. 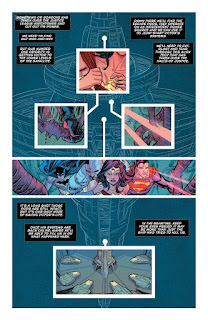 This is a great Justice League story with a focus on the DC trinity. In fact, some plot points are even contrived to focus on the trinity instead of the other JLA members, but the Flash gets a hilarious call-out. Manapul proves himself as a Renaissance man with this story and these characters, handling nearly everything to do with the comic book. He's certainly found his sea legs with the title by now. All I have left to show you are some highlights:
This is a moment in the first part, where the 3 are attacked by the new Green Lanterns, consumed by the alien parasites. They punch a hole in the Watchtower, and that single moment is blown up in an amazing two-page spread. Only two words per page, but comics gets to expand this moment and show us these actions that are happening so quickly. What an exciting use of the medium! 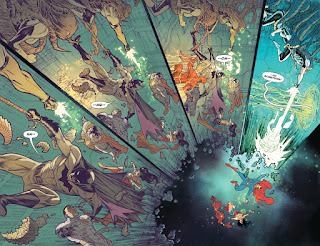 This is where you can tell Manapul is getting more comfortable with the characters. When Batman has no one to talk to while he's rescuing Cyborg, he starts joking with Cyborg himself. Prior to this, Batman was mostly getting one-word lines or grim/grumpy statements. Also you gotta love that cape in the first panel. 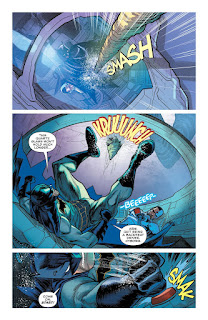 (Spoilers from here on out)
Just check out this spread from when Diana discovers the true nature of the aliens onboard. Each panel is a loop in her lasso of truth. 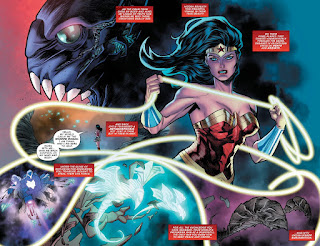 Eventually the trinity must land the watchtower, but in a graceful manner. Of all places, they stop it on top of a Lexcorp buiding in Mumbai, and a little "X" falls off the signage. Gotta love the attention to detail here. 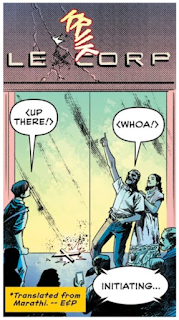 In issue 9, before the Flash and Batman were separated, Batman made a last-minute effort to give him help...turns out it was candy bars! Just what the man needed. Barry snacking is adorable.