At some point in time, DC rebooted their whole universe. No, not that time. No, not that one either. That other time that was recent-ish. I'm talking about their 2016 reboot titled "Rebirth." That 80-page mammoth that supposedly kicked off the reconciliation of the post-New 52-niverse with the pre-New 52-niverse.
In Rebirth, the Superman that we all knew died a hero's death (he did?), and Batman and Wonder Woman hardly know each other. In his wake, there's apparently a different Superman living the retired life with his wife Lois Lane (there is?)...and his son, Jonathan Kent!? So, the full premise of these six issues is that the "trinity" of DC's heroes are having dinner together, to get acquainted with themselves again, until they realize that something is lurking in Clark Kent's barnyard, which takes the 3 heroes hostage in a dreamstate...
Upfront, I only picked this book up because of Francis Manapul. That guy rocks the pencils and it's a visual treat to read his art. I love his debut work with Geoff Johns on the Flash and in New 52, and it seems that he's been "promoted" to writer as well, so the book is split up, somewhat by artists. When the 3 heroes are taken hostage by an unknown assailant, 3 different artists draw the 6 issues, each with their own styles which breaks up the story. Dark and moody colors accompany Clay Mann's pencils when we revisit Bruce Wayne's childhood, while dreamy, surreal watercolors accompany Francis Manapul's. It works, but it's just hard to read, knowing that it's only because Manapul couldn't foot the full 6 issues. 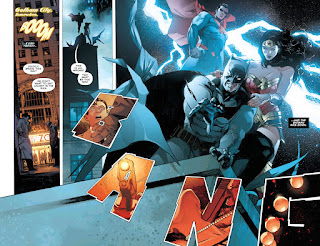 What gets me with this volume is that there's so much rehashing of these superheroes' origins, juxtaposed with this other stuff that I'm expected to know, but don't. Did I really need more exposition that explains how Wonder Woman came to be? There's just way too much internal monologuing in this story, told when I want to have it shown. Not only that, but eventually they explain the truth of the villains' attack, without much backstory. Spoilers: Am I supposed to know what a Black Mercy Plant is? Or The Green? I thought that was just the New 52 stuff? Poison Ivy is "mindwiped" to lose her connection with The Green, and her adoptive daughter...but does it really have any meaning if I didn't know what it was to begin with? 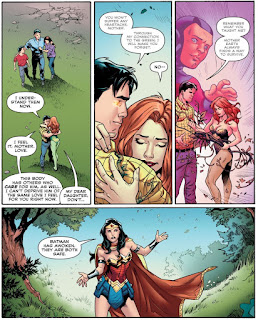 If you can get past the weird continuity stuff that they've either assumed you know and/or don't know, this is a solid presentation of DC's 3 intended premier superheroes. Kind of like Manapul's take on The Key's "Ambush Dream Sequence of Doom" story in JLA. As is, I came for the art. I stayed for the art. I don't think it really needed 6 issues to tell, but when you tell it with these artists, I'm OK with that.
Follow chezkevin on rss | twitter