Daredevil: Back in Black Vols. 7 and 8

Daredevil: Back in Black Vol. 7 -- Mayor Murdock
by Charles Soule, Mike Henderson
Previously, Mayor Wilson Fisk was shot with a bunch of arrows, making Matt Murdock, the Deputy Mayor, the next in command. This is what happened next: Matt Murdock reverses a few of his predecessor's legislation, particularly the one criminalizing vigilante superheroism, and enlists the help of his fellow superheroes to defeat the Beast and his ninja army, the Hand. Aside from a little hokey twist from Matt's priest, it's a rote superhero story: bad guy takes over city. good guy meets bad guy. Good guy beats bad guy. Done.
Artist Mike Henderson gets a chance to shine in this trade-sized collection. He has a Rob Guillory-esque sense of cartooning that makes light of a lot of the drama happening around them. It isn't widely dissonant with the story but doesn't exactly do it any favors too. there's a great panel of Hammerhead that juxtaposes the absurdity of the situation, with the creepiness of enlisting a criminal. 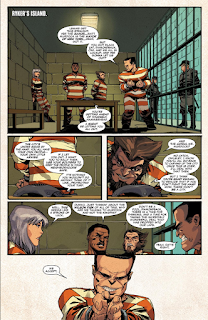 It's an entertaining read, but the action and the plot just happens so broadly and quickly, that the lack of an emotional core amounts to a story that's little more than a boy playing with his action figures. Dramatic motions ensue, and then they're retracted a few pages later. Kind of like how a cliffhanger is immediately resolved on the first page of the next issue. The problem is that it lacks weight if this is all you're going to do.
The hook for the next story is this: the Kingpin recovers from his encounter with the Hand, and reassumes the Mayoral office, while accidentally slipping that the vote was indeed -gasp!- fixed. West Wing-style drama ensues in Hell's Kitchen.

Daredevil: Back in Black Vol. 8 - Death of Daredevil
by Charles Soule, Phil Noto
Two storyarcs wrap up this final collection of Charles Soule's run of Daredevil. Issues 606-608 comprise of the "return" of Matt Murdock's fake twin, Mike Murdock, and issues 609-612 are "The Death of Daredevil." They're both umbrella'd by Matt's efforts to uncover the truth about how the Kingpin rigged the election that put him in the Mayor's office. We get to meet Cypher, a mutant who can understand any language in the world, along with "Reader," a blind man who has the ability to turn the first three things he reads in a day, into reality...and his seeing-eye corgi! 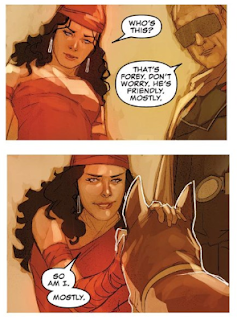 It's a fun return to form for Daredevil that reminds us of the emotional core of the series. From his gathering of this motley crue of vigilantes, to a page of how in New York City, you get things done because you "know a guy," Matt Murdock is a man that never gives up for the love of his city.
Phil Noto kills it on every page, using his photorealistic style to show off a double-page spread of the mundane with the fantastic: heroes gathering in a courtroom to testify against the Kingpin, along with dreamy intimate sequences of Matt hooking up with his former lover Elektra. 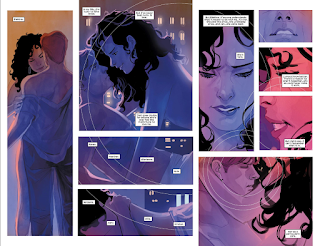 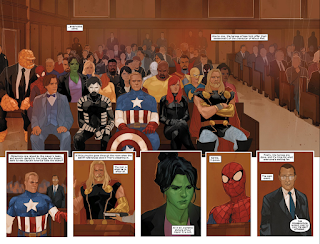 I won't spoil it for you, but the title already tells you everything: "The Death of Daredevil." Near the end, there's a brilliant use of the black page that conveys to you what's happening. For the entire collection, I was reading about Daredevil fighting an army of villains. He gets slashed, he gets shot, he gets beat up. He gets hit by a truck. But none of those compared to me just reading a page of black. For the first time in the trade, I felt fear. I was nearly so afraid that I couldn't even turn the page. But it's when you turn the page that Matt shows you what it's like to not be afraid. In Soule's words, it's the thesis statement for his run on Daredevil.
The whole thing kind of reads like a spy thriller. Matt is the narrator, but sometimes you're not sure you can trust the things that you're seeing or what he's saying. This makes sense considering Soule is a prose writer for this genre. For those of you that stuck with the title, here's your payoff. I won't spoil it here for you. Read it to believe it.
Couple more highlights: 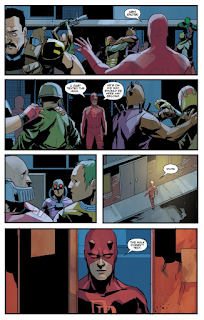 Beautiful scene of Mayor Fisk. So many shades of white. 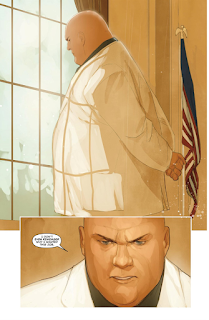