I looked around for a collected edition of this 7-issue miniseries by Robert Morales and Kyle Baker, but apparently they've never been collected! So the easiest way to access this story is via digital single issues. Fine by me.
Truth is a story from 2003 about the Super Soldier Serum project in America during WWII, in the 1940s. The traditional story is that Dr. Erskine engineered the super soldier serum and it worked perfectly on Steve Rogers -- only for Erskine to be assassinated and his serum to die with him, making Steve the first Super Soldier and the last Super Soldier. Most of that's still true. But before it worked perfectly on Steve Rogers, it was experimented on, with a battalion of African American soldiers. Truth is their story.

We follow a few different black Americans: Isaiah Bradley, a teenage newlywed who leaves his pregnant wife to join the draft, Maurice Canfield, one of New York's black elite and Sgt Lucas Evans, among others. Through them, we get to see the world and learn what racism was like in the 1940s. Truthfully, I had to look up some of the slurs myself although I doubt that they are all that obscure. From the overt to the covert...it's just a way of life. From the way they're the ones who have to clean the latrines, to being  herded like animals to a secret location for the next part of the project. 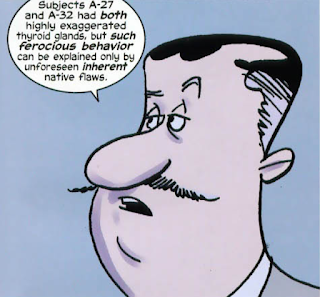 By the fourth issue Isaiah breaks out as the heart of the story. When Steve Rogers is held up in the Pacific due to a monsoon, it's up to Isaiah to destroy Nazi Germany's own super-soldier camp in Schwartzbitte. When he gets captured by Hitler, the dictator actually makes him an offer: join the Nazis to fight his American oppressors. 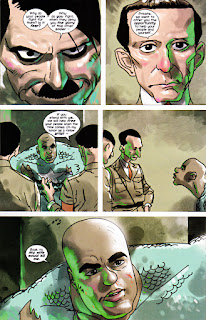 It's a hilarious reaction that immediately humanizes him. A life-changing offer and the first thought is his wife's opinion. It's around here that you learn: the same thing that makes Steve Rogers Captain America, is probably what makes Isaiah Bradley this Captain America.
The rest of the story jumps between the past, in Isaiah's time in the 40's, and the present, in modern-day America where Steve Rogers is first learning that Isaiah even existed. Steve tracked down the original suit that Isaiah wore, yet he hasn't been able to find Isaiah. What happened to him in Hitler's bunker? Is Isaiah still alive? Cap himself goes through a history lesson with us, and it's never boring. Even when a character gives exposition, it doesn't feel superfluous. I learned about actual real world events like the Red Ball Express, the Red Summer of 1919, and the Tuskegee Experiments. Coupled with Isaiah's story, it makes it feel that much more real. 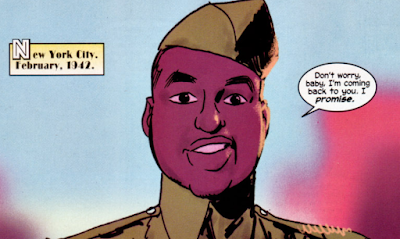 I have to warn you, this is a heavy comic. The story takes a turn when Isaiah encounters a gas chamber  in Schwartzbitte, for example. It almost has to be counterbalanced with the newspaper strip-style cartooning from Kyle Baker. He channels Kirby when he likes, and takes some shortcuts by omitting backgrounds. But he always nails the emotion in the characters, and doesn't add noise to the story. This is a page-turner that reads super-smooth with Kyle's unobtrusive, to-the-point art. I know I complain a lot about how some stories don't need so many issues to tell. But for this story, I think that every issue was important. I wouldn't read it any other way.

BONUS and also kind of a spoiler: When Captain America sees that Isaiah did survive and make it back to the US, he sees what kind of life Isaiah had. Goofy cartooning gives way to realistic caricatures for a beautiful moment. Isaiah did get to have a life outside of the war; he met all these celebrities, and it helps you see past the tragedy of everything else. 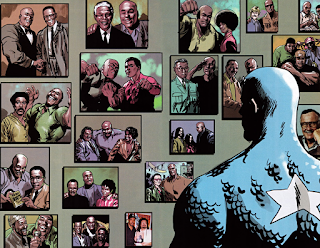 I learned about this series from episode 2 of the Disney+ series, Falcon and the Winter Soldier. In that episode, Isaiah is portrayed mostly as a tragic character, though there are some details that you couldn't exactly fit into a few minutes of a television scene! It's uplifting to see that the source material has a somewhat different ending for Isaiah.