The Mighty Thor Volumes 1 and 2: Thunder in Her Veins and Lords of Midgard 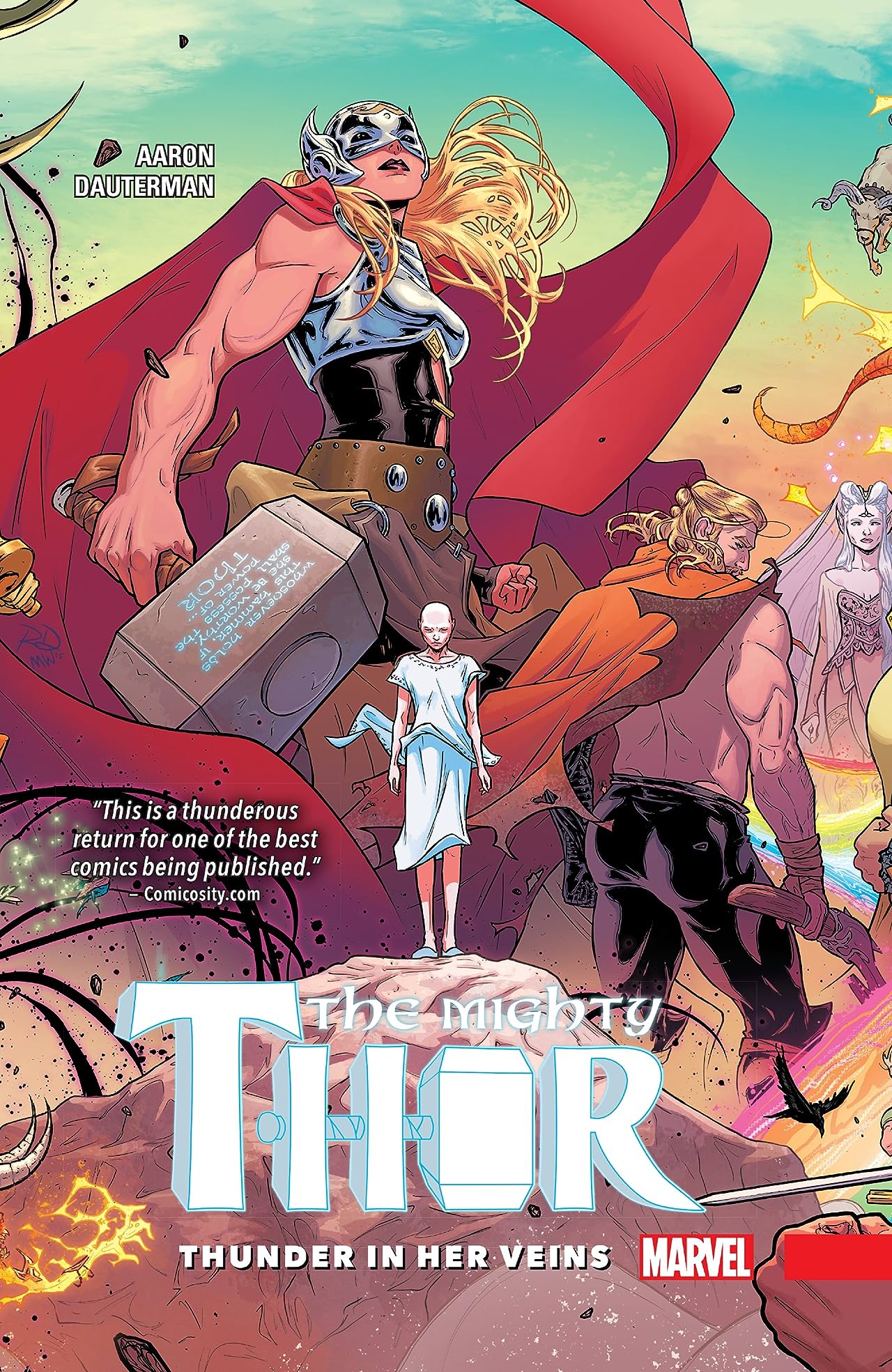 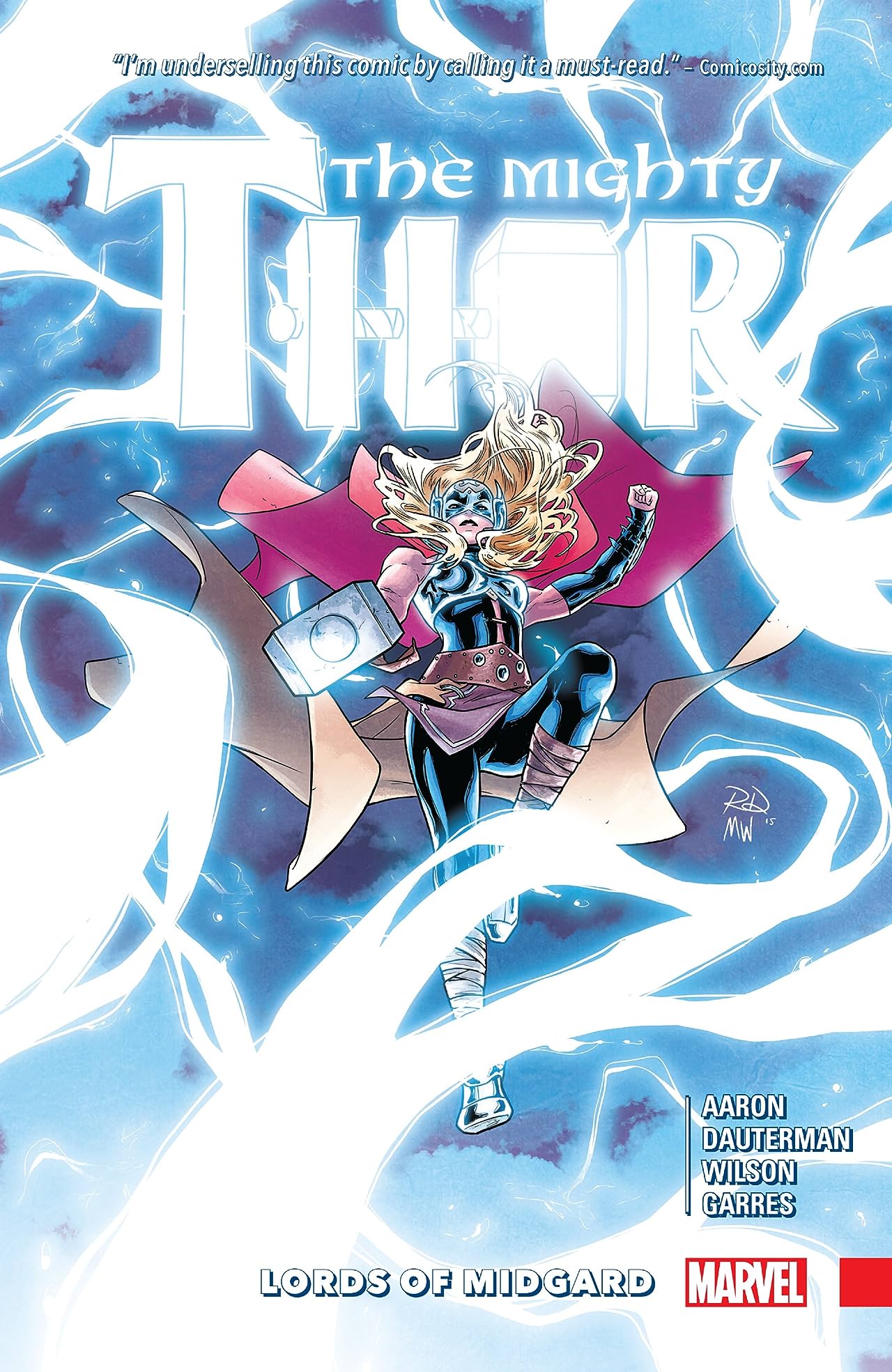 Volume 1 collects the first 5 issues of the 2015 series, and Volume 2 collects the next 6-12 issues, by Jason Aaron, Russell Dauterman and more. After Thor made her debut in the 8-issue Thor, she continues her adventures with her identity unknown to anyone, enraging King Odin of Asgard who cloisters away on his throne while the 10 realms bicker among themselves.

Similar to the initial issues of Jason Aaron's Thor, there's a whole lot of events, but not much of a cohesive story. Plotlines in the first five issues include the war of the elves, the trial of Lady Freyja, and the civil war of Asgard, but they're all written over with some deus-ex-machina-esque plotline. They don't get the pagetime they deserve, and that's a shame. I guess there's the argument to be made that sometimes that's just how plots do resolve; sometimes it's that quick and easy. So then why even bring them up as a story? 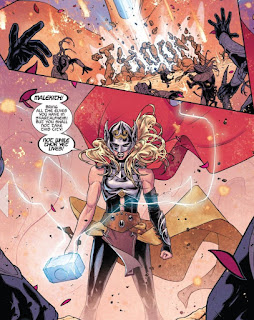 You can expect all the other things that the team has delivered before: epic space battles, Shakespearean humor, gorgeous art, and cat-head Loki (!). Thor even uses a storm to prevent nuclear holocaust in Alfheim! But to read these five issues by themselves is not a satisfying experience. If you're reading this sight unseen, better off to just read the whole 12 together.
Issues 6-7 of Volume 2 are a bit of a reprieve, where Loki aligns with another person in Malekith's "Dark Council." It's a nice break with a "story within a story" that sets up a battle to come for Thor. Presented without context: 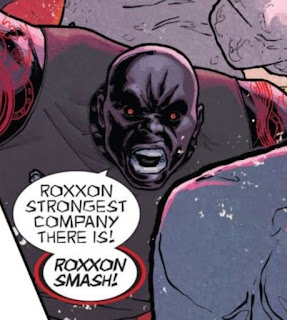 The main story of Volume 2 is the "Agger Imperative." It's named after the CEO of Roxxon Enterprises and it's the fallback scheme should someone attempt a corporate takeover of his business. Namely... If he can't have Manhattan no one else can! When the Silver Samurai and the Exterminatrix attempt to kill Agger, they trigger the Imperative and put all of New York at risk, and it's up to Thor and S.H.I.E.L.D. agent Roz Solomon to stop it. Along with... Dr. Jane Foster?! It's an exciting race against time with a hilarious cheesy subplot of the two S.H.I.E.L.D agents tasked with finding the identity of the new Goddess of Thunder. It ends in a critical reveal to Agent Solomon, of Thor's secret identity. 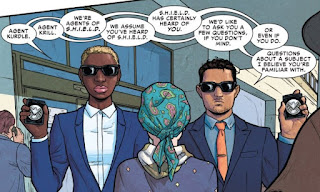 The twelfth issue is another "break" that tells the origin of Mjolnir of old Asgard. A look back that helps you look forward and worth the read. Volume 2 is a stronger read that earns its resolution and progresses the tale of Roxxon on Earth, of the War of the Realms in Asgard, and of the Goddess of Thunder.

One more thing: it gets a little annoying to see very obviously Tom Hiddleston in the art. I know he's a hugely popular version of the character, but it's highly dissonant to see that face in this medium and just pulls me out of the story. 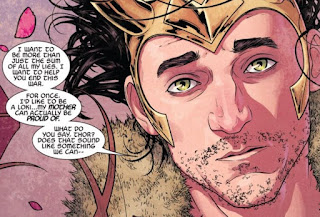