War claims the realm of Nidavellir...the realm of the dwarves! The Dark Elf Malekith the Accursed's so-called war continues in the form of Muspelheim, land of fire, laying siege on Nidavellir. In previous volumes, Malekith conquered Alfheim, the realm of the Light Elves, spurring their voyage to Nidavellir to seek refuge. Unfortunately, it doesn't work out. Volstagg the Valiant and Jane Foster are visiting Nidavellir on a diplomatic trip when fire goblins swarm the hostel, burning all who stand in their wake with Maggot bombs.
The trauma leads Volstagg to claim the Mjolnir from a lost universe to become...the War Thor, a raging God of Thunder who thirsts only for blood. What follows is an all-out brawl between him, Queen Sindr of Muspelheim, and Thor and the unworthy Odinson join in as well. 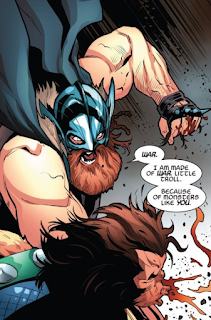 This is a fun, engaging, and exciting read about war and friendship. Thor resolves it the only way that she can, and it's an inspiration. There's a Generations one-shot collected here as well, tying into the "Marvel Legacy" branding/numbering, and it's a gorgeous, hilarious time-travel story featuring Thors both Mighty and Teenage.

Current plots are respected along with running plotlines, like the ongoing War of the Realms, and Jane's struggle with her alter-ego. Previous stories of Mighty have made the setup so that you can see the payoff here with the War Thor, and I can't wait to read what's next.