What a week! We had the unveiling of the iPad, President Obama's State of the Union Address, and the cancellation of a Chicago fireworks tradition -- only to split it up into three fireworks shows! It's been such an exciting time for news, and it's been an equally exciting time for my life.

I purchased and read two comic books this week. 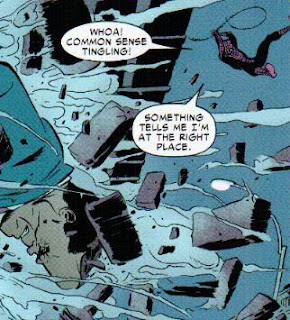 Apparently, Slott's been wanting to take a crack at Mysterio since day one. It was only junk like New Ways to Die and Brand New Day that got in the way and quite frankly, I don't blame the guy. Slott really does manage to put his heart into the issues, and the result is one heck of a Spidey issue.

Issue 618 brings us back to a wider scope in spider-comics. We're reminded of Mr. Negative and the gang wars in NYC. Then we quickly escalate into a mystery of who really died and who didn't, dragging in Carlie Cooper, a Brand New Day extra and a forensic cop, into the fray.

Anyways, that sounds like a bunch of jumbo. That's probably because it is. This story is for people who've read Spider-Man. People who read Hammerhead's transition into work for Mr. Negative, people who read about Police Cpt. George Stacy and mob boss Silvermane back when Spidey wasn't even issue 200. Slott packs the story with loving nods to other plot points or past stories, and as a webhead, it's a wild ride to read. 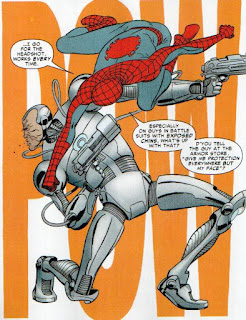 You can really tell when the writer is a fan of the title. He brings in reverence for the past stories, and tells new ones in an exciting way. It may not be too reader-friendly, but the art is worth the price of admission alone. Marcos Martin packs each page with so much material, but it goes by smoothly and masterfully. Anyone who appreciates comic art, and anyone who appreciates a good, smart Spidey story should get in on this action.

I'm giving both issues ZERO foam-finger freddies out of FIVE.