Serials: The Flash #8, The New Deadwardians #2 and more

Here's the schedule this week:

I'm really impressed that Marco Chechetto drew through three comics in three weeks. You don't really see that anymore, ever.

I'm really disappointed, though, that he took a lot of shortcuts, outlined here from Caleb Mozzoccoco. Chechetto's images are very dynamic, especially when it comes to Spider-Man, and they're really fun to look at. The major scene in the finale of the three-part "Omega Effect" is Daredevil's attempt to save Cole, the Punisher's ward, from a life of murder, and the ending is a copout that doesn't lead to any definite conclusion except for the continuation of the status quo.

It was a fun ride, but the ending just doesn't cut it.

--The Speed Force! This issue reminded me why I love comic books, and I'm pretty sure it's the one that Manapul and Booch have been waiting to tell -- the story of the Speed Force. Check it: it's a nexus of energy that, over time, accumulates energy. When that amount becomes excess, it lashes out to reality and creates time anomalies, dropping Panzer tanks in Mayan civilizations and the like. When Barry Allen became the Flash, he became connected to the Speed Force and, when he runs, he releases that energy!

It's such an amazing comic book idea. When he runs, the Flash is literally protecting space-time. I think it's a great metaphor for running too: running releases our pent-up energy.

I was so impressed with this issue, I tweeted to the team, and Manapul tweeted back!

Jealous? I love the tic they added to Hynes' dialogue, it reinforces how much the Speed Force has warped him. I was so impressed with this issue, visually and textually. I've been talking about how the writing will eventually catch with the art, and I think it's gotten to that point now: the two are telling the same story now, and it's such an exciting one.

The Goon #39
by Eric Powell and Dave Stewart

Here's the "all-parody" issue, in which Eric Powell jabs at the superhero genre in every. single. panel. It's a fun ride, and the material doesn't stop, because there's just so many things to make fun of in the genre.

If you've been following super-comics for the past few decade, you'll pretty much get every joke he makes. Eric Powell has an impassioned column after the 22 pages, and it's important: he talks about expanding the medium beyond superheroes, and breaks down a lot of arguments as to the relationship between superheroes and independent titles. Definitely worth your time.

Man, check that cover! I love looking at it.

The mystery continues to unfold like a Sherlock Holmes story, and I'm really digging it. It's up to the sole detective of Scotland Yard, George Suttle, to uncover how a British Lord has been killed without the traditional methods that kill a vampire (note: in The New Deadwardians, the upper class have taken "the cure" and are now vampires, while the lower class are either mortal or "restless:" they've become zombies). There's some great world-building here, as well as some great characterization for Suttle, who shows some wariness to having taken the cure.

I'm also really impressed with how everyone has a different voice. The way they're written and drawn, you can really tell. (Example:) 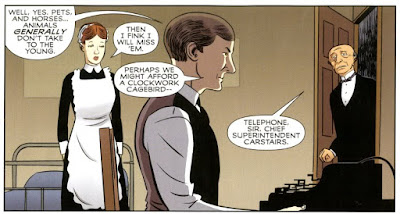 For a while, I've been complacently holding off on closing my subscription with Marvel. I originally signed up for the Captain America, when McNiven was working on it, but when he left, I decided to switch over to Secret Avengers, so I could have some foot in with the Avengers and keep a tab on them.

Hardman's cartooning is pretty excellent, and Remender knows what he's doing, but I don't really find the story compelling any more. There's nobody I can relate to.

The storyarc concludes here, and there's a great last page that hooks you in, but I'm not so interested anymore. Pretty sure I'm gonna ask for a refund today.