Flashpoint: Emperor Aquaman and Wonder Woman and the Furies 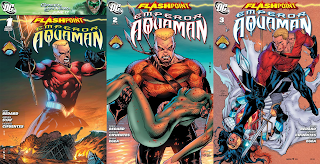 At last, the story of "Emperor Aquaman," one half of the awful war that's consumed the Flashpoint timeline between the surface world (the Amazons of Themyscira) and Atlantis. Masterful narration combined with smart flashbacks makes this a very engaging miniseries that explains how Aquaman managed to sink all of Eastern Europe, while moving the plot forward to the conclusion of Flashpoint.

It's only a shame that the story is continued elsewhere. This one helps you understand the tragedy behind King Arthur Curry (Emperor Aquaman), and why he's more angry than the regular man we see. The narration has a "Sword in the Stone" tone that makes you feel like you're reading a story about royalty. 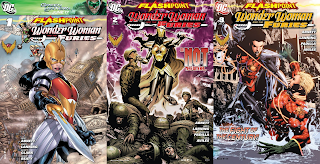 Similar to the above, we get to see the history of Wonder Woman, Diana, Princess of Themyscira. Unlike her sisters, she grew curious about the outside world and met Arthur Curry at sea. There's a moment of discovery that parallels Diana's discovery of Man's world, but here's the difference: together she and Arthur realize that they could forge a world of diplomacy if they were to marry, combining both nations of Atlantis and Themyscira, to foster global, mutual growth.

There's a royal scheme that makes it all go South, explaining to you why it wasn't completely Barry's fault that Wonder Woman and Aquaman are at war. And you'll learn why, the world went to hell, when there was so much hope.

The fact that both of these tie directly into Flashpoint #5 tells you about the publishing schedule for the mega-event. It was a large change to DC's lineup of comics, and it took a significant amount of coordination just to be able to sync them all up together. It's the kind of risk that DC took with books like the weekly series 52, or Wednesday Comics, and it pays off here just as well, which is to say, pretty damn well.