Mockingbird and Flashpoint: Deadman and the Flying Graysons 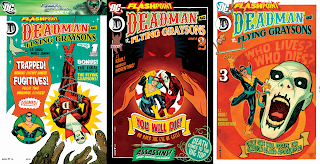 In the Flashpoint timeline, Richard Grayson's parents never died, and together they defeated death on a daily basis as, the Flying Graysons! Their circus troupe includes other performers such as the acrobat Deadman, travelling across Europe, which. . . happens to be in the middle of the war between Emperor Aquaman and Wonder Woman. Yikes.

Putting the familiar characters into an unfamiliar situation makes for an interesting read. It devolves pretty quickly into a traditional super-comic, where Dick loses his parents to the war, and gains special abilities with the ghost of Deadman. Don't take that as a negative judgment though, it's still captivating to read about him and the struggle to survive in someone else's war. I could have seen this turning into a larger series, if it was given the chance.

I have numerous qualms with the art of Fiorentino. There being Amazons, he draws them in a needlessly gratuitous way. There's a whole splash page of a Sharkman eating an Amazon in her armor, with the woman ripping apart his jaw bathed in blood, showing the reader her cleavage as well as her butt. Yikes comics. 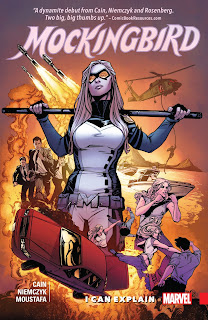 Don't let the paperback fool you! They place the one-shot at the end, but really you should read it first. You don't really find out until you read the letter at the end of issue 1, unfortunately, but the one-shot came first, and because it was so smart, Marvel saw the demand to give Mockingbird her own series.

That letter at the end of the first issue informs you of Chelsea's idea for the first storyarc. She admits it's a risk, and let me tell you, it paid off. The story is a "puzzle box" as she calls it, framing the first issue as a series of medical visits to S.H.I.E.L.D.'s medical clinic underneath Chelsea Market, and then using the subsequent four issues to explain each of the four medical visits. A special thing to note about Mockingbird (Bobbi Morse): she's a person first, scientist second, and S.H.I.E.L.D. agent third. She comes to life through Cain's narration and her history of having been revived by Nick Fury's concoction of super-soldier serum and Infinity formula, makes her a person of interest to S.H.I.E.L.D. 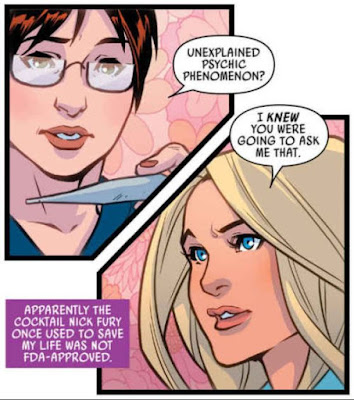 There was much acclaim when this comic came out, and for good reason. It's a story that plays with comic book conventions and rewards the reader for paying attention to each panel. As a medium, the comic book is a format where you can take chances like with no other media, and Chelsea Cain takes advantage of it to the fullest.