You may have noticed the way I've been going through each Fables trade. Here's a moment from the first, in which Prince Charming is great in the sack, and the second, in which Snow White sets a barn on fire.
Those sound worse when you type them out.
Regardless, today we continue pimping out Fables, because honestly, when fandom is in constant complaint over who writer X has brought back in book Y or how artist X just anglicized character Z, they could spend their time reading comics that are awesome instead.

I'm sure you have those books that you regularly hate to read, but for some reason --maybe out of habit, or brand loyalty, or a delusion that the writing will get better-- read them faithfully. That's exactly how I am with Judd Winick on Green Arrow/Black Canary, but instead of wasting our money, maybe we could read something better instead.

So here, we have Bigby Wolf (The Big Bad Wolf!), who is the sheriff of Fabletown, and Snow White (Snow White!), who's the deputy mayor. Bigby kind of has a crush on Snow White, and here, in volume 3: Storybook Love, their relationship grows, as both of them find themselves in the forest with no memory of how they got there. . . 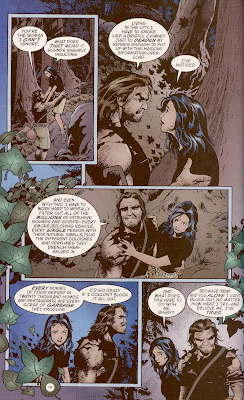 The writing's still coy, but after the entire ordeal, Snow gets softer around Bigby. You can read the trades if you wanna find out more. . .

. . . and any good local library should have volume one: Legends in Exile at the very least. Plan a trip today, folks!