Spidey on a car: because we DEMANDED it!

I got the "Spidey swinging in the city" cover by John Romita Jr., instead of Doc Ock's "Be my Valentine Spidey!" cover by Alex Ross. It's so rad!


I am going to be honest, but I think Doc Ock totally got shafted in the main story. The idea is that he's trying to create a better city, but it doesn't come off as "Hey guys, I'm gonna make NY better and stuff." It comes off as "Grrr I'm gonna take over NY, and you're gonna like it and stuff." It's a great idea, in theory, but it didn't work out so well later on. 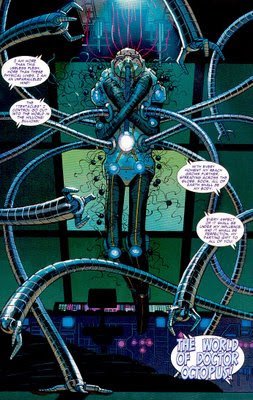 I just don't see the Doctor being this psychotic.

Aside from that, the story was great! John Romita Jr. got the chance to do what he does best -- draw Spider-Man, along with the entire Marvel Universe, and Spidey does all the fanservice-y things that I like, such as:

Spidey on a car! 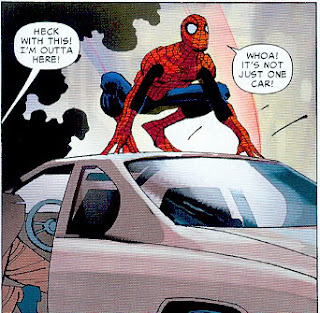 Spidey in a brainwave helmet! 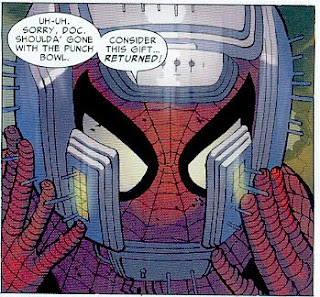 Spidey in an F4 hoody! 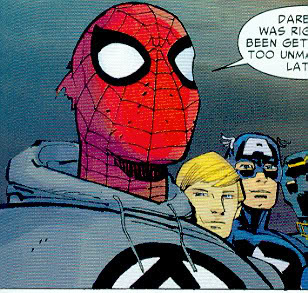 The actual story involves Amazing Spider-Man at its best: taking Peter Parker's life, and Spider-Man's life, and then forcing the two of them into a blender on "HIGH." The results are messy, and they make good comics. 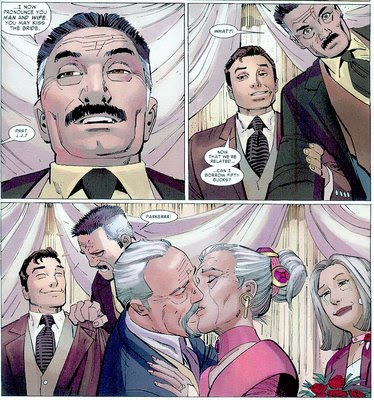 The Peter-Parker's-life part here revolves around Aunt May's wedding to J. Jonah Jameson, Sr. There's also a beautiful cliffhanger that couldn't get any more Spidey Soap Opera: Peter says, "No way!" and May says, "Anna Watson?! What have you done?" after someone catches her bouquet -

- It's Mary Jane Watson! TO BE CONTINUED!

After that is a whopping 42 pages of new material! No ads at all either, except the two behind the front and back covers.

There's an absolutely brilliant and hilarious 12-pager from Stan Lee (The Man himself!) and Marcos Martin. Spidey talks to Dr. Gray Madder, a psychiatrist who looks just like Stan in my Essential Spider-Man's! It summarizes the madness of Spidey's past 47 years, and it is so fun! 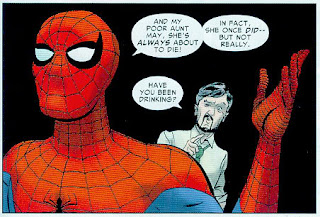 There were other stories too. Guggenheim did a piece that rampantly objected to the continuity placed by Slott in the main feature: c'mon guys! If you're both in Spidey's braintrust, you really oughta know what the other's writing.

Kelly does a short piece that warns of Stories to Come.

All in all, this was a great, fun comic book that left me feeling warm inside, and reminded me why I love ol' Webhead. I'm glad I got it! 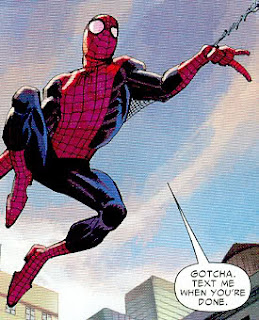