I always make a big deal about decompression, because hey -- these things cost 3 bucks a piece. I could get 3 Clark Bars for that, and I'd still have enough to beat everyone at the claw machine in the arcade.

So hopefully, you understand my apprehension with "New Krypton," the crossover event between the three Super-books. Geoff Johns knows how to tell a story, that's for sure, but he notoriously writes for the trade. A story he tells in five issues could most likely have been done in 3. When you pay for five comic books, but you really only get three, that kind of crap really grinds my gears.

I purchased parts 1 and 2 of the crossover (here and here!), but when part 3 was an "interlude issue" designed to flesh out some guy I don't care about, I basically gave it up. A few months later -and a local sale- I picked up the rest of the parts, still ignoring part 3.

Herein we talk about 'em! The approach here is to enjoy the crossover -- while at the same time ensuring each issue has weight in and of itself, and isn't designed just to take up space for the trade.

Johns handles this part, and boy is it a doozy. Remember General Zod? In the movie with Chris Reeves, he was one of the guys trapped in that big glass doo-hickey -- the Phantom Zone. In the comics, he's also imprisoned, and General Zod's underlings sow the seeds for his return. Their feelings about Earth are characterized masterfully, as is the business relationship between General Lane (Lois Lane's father) and Lex Luthor. 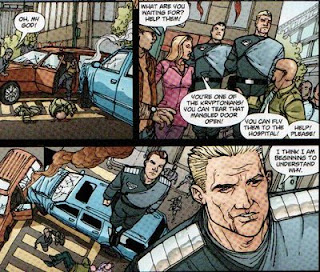 Johns is also notorious for his liberal use of retroactive continuity, and he revises the heck out of Super-continuity here. The reason "Bottle City of Kandor" has been used in so many stories, but the real Kandor is here, is because Kandor was such a great city, advanced in science and politics, that every other city took its name! 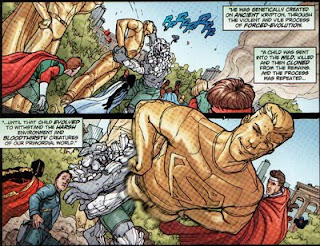 And remember Doomsday? You know, the thing that randomly fell from space and "killed" Superman? Well, it turns out he was a primordial science experiment from Ancient Krypton! Neanderthal Kryptonians released a child into the wild, cloning what remained, until something evolved enough to survive! That is the insane kind of crap any comic book should have.

The plot moves along well enough -- the Kryptonians chillingly beat Doomsday to a pulp (ON THE MOON!!!!), as Zod's cronies and Lane/Luthor scheme.

Oh man, this issue does a little rewriting of Supergirl's history too.

That is to say, it basically overhauls her past. Basically, all those memories of Kara needing to kill her cousin Kal-El, was because she was exposed to K-radiation for 30 years.

Her father, Zor-El treats her and purges the remnants from her body. Kara remembers her real life now.

Aside from that, not much happens. There's some set-up for tension, as Supergirl must choose whether she is Kryptonian or Earthling. We see the mysterious "Superwoman" here, who's getting a five-issue arc right now. 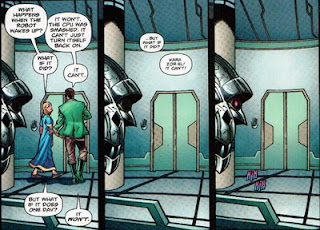 So, like so many other issues of Supergirl, this is a telling of her origin. Hopefully, this is the one that sticks!

A mediocre part of the New Krypton crossover.