I was kind of hoping that I'd get some extra hits from "New Krypton," but apparently, nobody's searching for it. It may be because it's not much of a story, or maybe it's just yesterday's news already. How time goes by.

This is the aftermath of Zor's death, the leader of the New Kryptonians and Supergirl's father.

That's pretty much it. There's a lot of talking, but it doesn't really go anywhere. The words don't mean anything; it's just filler. Superman's spent probably the entirety of four issues failing at being a diplomat, and Supergirl's mother, Alura is set up to take revenge for her husband, against the humans.

There's a social statement they try to make here, about how you can't judge the many from the few, and the few from the many, but they don't capitalize on that at all.

That said, you do not want to mess with Supergirl in this issue. 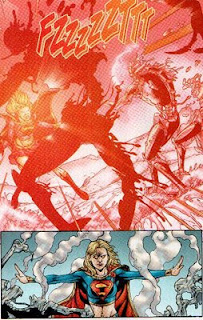 She will bust you up.

More inflammatory gestures, and more hostility. Basically, the only reason the Justice League et al. have an all-on brawl with the New Kryptonians, is because they don't like each other.

How idiotic is that? This comic book single is an excuse for people to start fighting with each other, when there was never any reason at all. There is no actual motivation, beyond people being hostile towards each other. 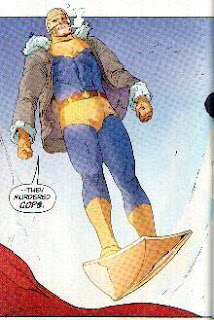 At least the Guardian looks spectacularly goofy, surfing on his sheild in a parka in the arctic.

Nothing is resolved. All the new characters that were introduced don't have a single say in any part. The only reason they made all this hubbub, was to introduce new characters for some other storyline, not New Krypton. If you ask me, New Krypton has already failed as a story, but will the final part, part 10, redeem it?